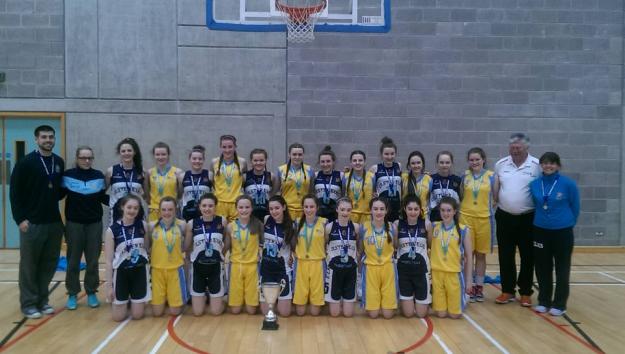 U16 A Boys Results:
http://www.basketballireland.ie/u16aboysfinals
http://www.basketballireland.ie/u16aboyspoola
http://www.basketballireland.ie/u16aboyspoolb
http://www.basketballireland.ie/u16aboyspoolc
http://www.basketballireland.ie/u16aboyspoold
U16 A Boys Final: BY JOHN COUGHLAN
Templeogue            41
Neptune                  35
The biggest shock in Irish basketball this season as Templeogue defeated a highly rated Neptune side in the final of the U16 All Ireland championship at the Parochial Hall yesterday.
Many pundits were forecasting a blow it for Neptune leading up to this decider but all were proved wrong as Templeogue showed their true credentials when the going got tough.
Naturally the scenes at the final whistle were ecstatic in the Templeogue camp as coach Jason Killeen praised his troops battling qualities.
âWe are over the moon as we lost to Ballincollig in a pool game and were lucky to see off Blue Demons in the quarter final but the one trait that goes through this club from juvenile to Senior is team spirit,â Jason said.
Going into the final not even the shrewdest pundits gave Templeogue a glimmer of toppling Neptune but in the words of Killeen that suited his team.
âWe love being classed as underdogs but we knew if we could hang with them up to the fourth quarter our key players would get us over the line.
âFair play to Neptune they have an unbelievable squad and I wouldnât blame anybody for thinking they would win this championship in a canter but we had other ideas and our game plan came off,â added Killeen.
The mood in the Neptune camp was one of sheer disappointment as assistant coach Don OâSullivan tried to assess his sideâs defeat.
âThe players know they underachieved but look thatâs the beauty of sport and I am sure we will bounce back from this loss and mature into a better team,â Don said.
âWe didnât do ourselves justice out there today but look Templeogue were deserving winners and we have got to take this defeat on the chin.â
The Cork side got off to a good start when David Murray banked a baseline shot that had their supporters in rapture.
Templeogue after a slow start gradually got grips with their opponents who were intent on shooting silly three pointers.
Neptune were struggling at both ends of the floor as individualism was hurting them in the offence court.
Luckily for Neptune Templeogue were also struggling in the offence court and amazingly at the end of opening six minute.
No doubt the Neptune fans were hoping to improve on the restart but in their opening possession they turned the ball over.
Finn McKeon responded with a three pointer for Templeogue as the Neptune coaching staff looked under pressure to hatch a plan to stem the tide.
As the quarter matured the play got sloppier and when the Templeogue point guard Kris Arcilla went coast to coast with 1.33 remaining to the interval he stretched the visitors lead to seven points 14-7.
Credit to Templeogue Arcilla produced a stunning three pointer that helped his side lead 19-9 entering the third quarter.
It was amazing that Neptune continued to struggle, as Templeogueâs defence was sheer hustle that restricted their opponentâs key shooters.
The one noticeable aspect was Templeogueâs shrewd coaching duo of premier league players Jason Killeen and Sean Flood who had certainly done their homework on Neptune prior to this final.
To be fair coming down the stretch Neptune made a rally and when Cian Heaphy made a deft move to the hoop with five minutes remaining the deficit was reduced to six points.
Two minutes later Neptune looked to be in ascendancy following a neat jump shot from James Hannigan as the lead was reduced to three points 34-31.
Thatâs as good as it got for the championship favorites as the class of the Templeogue point guard Kris Arcilla ensured the Dublin side recovered their composure.
Another player to shine for the winners was Aslan Kisuka who was awesome at the post coming down the stretch.
In the end Neptune can have few complaints as when you are reduced to six minute quarters you have to alert from tip off, as their opponents will to win eventually wore them down.
Neptune: J Hannigan, S Hannigan, D Murray, C Heaphy, D OâSullivan, J Collins, R OâDriscoll, J McGrath, J Kanada, C Fitzgerald.
D Murray 7, J Hannigan 6, S Hannigan 5.
Templeogue: E Keane, T Phelan, C Flood, I McKeon, K Robinson, K Arcilla, J Walsh, M Thompson, H Webster, F McKeon, A Kisuka, M Harper.
K Arcilla 12, K Kinihan 8, F McKeon 5.
Referees: Peter James Coughlan, Ger Daly (Cork).

U16 A Girls Division 1 Final
DCU Mercy 32, Glanmire 27
Mercy Convent, Waterford.
17th April 2016
The Final of the U16 A AICC Girls Final was a very close and tense game.  DCU got off to a dream start leading 7 â 0 before Glanmire opened their account with 2 points from Analise Murphy.  Glanmire worked hard to get score back during the quarter but DCU found scores much easier to come by.  DCU led after the 1s t quarter 13 â 7 with Brona Cassidy Power hitting 6 points for DCU and Analise Murphy replying with 5 points in the opening quarter.
The 2nd quarter was evenly matched with both defences coming out on top. Emily Black scored 5 points for DCU and Meave McCarthy responded with 4 points for Glanmire leaving the half time score 22 â 14 to DCU.
In the 3rd quarter both teams showed the effects of 6 games over the two days and scores were somewhat hard to come by.  DCU kept the pressure on Glanmire throughout this quarter.  Glanmire fought hard for everything and never gave up leaving the score at the end of the 3rd quarter 26 -20.
The final quarter saw Glanmire up the pressure on the DCU team and narrowed the gap to a 3 point game.  This was a game that kept the spectators on the edge of their seats with both teams trading scores.  Glanmire never got the score to level the game as time was against them.  Final score was 32 â 27 in favour of DCU.  This was an excellent game of basketball by both teams.
DCU Mercy: A. Donohue 12, E. Black 10, B. Power Cassidy 6, N. Kenny 4,  F. OâGrady, M.OâSheaghdha, K. Nolan, M. Kelly, A. Byrne, N. Hickey. Coach: Sean Ingle Asst. Coach:  Damian Sealey
Glanmire: A. Murphy 9, M. McCarthy 7, S. OâShea 5,  R. Quirke 4, C. Kearney 2, A. Quirke, C.OâDriscoll, K. Griffin, M. Furlong, E. Butterworth, T. Lynch, J. McCarthy. Coach:  Aidan OâShea
U16 B Girls Results:
http://www.basketballireland.ie/u16bgirlsd1finals
http://www.basketballireland.ie/u16bgirlsd2finals
http://www.basketballireland.ie/u16bgirlsd3finals
http://www.basketballireland.ie/u16bgirlspoola
http://www.basketballireland.ie/u16bgirlspoolb
http://www.basketballireland.ie/u16bgirlspoolc
http://www.basketballireland.ie/u16bgirlspoold
U16 B Girls Division 1 Final
Ulster Elks 35, Muckno Lakers 24
17th April 2016
LYIT
Report: Niall McDermott
The division 1 final was an all Ulster affair with the Muckno Lakers seeking to bring a second all Ireland trophy to Monaghan this season after their senior ladies won the inaugural Intermediate National Cup but the Ulster Elks, led by the impressive Maguire sisters, made sure the trophy would venture further North with an efficient and polished display.
The Elks had squeaked past a tough Ballyshannon side in the semi-final by 2 points and came out in first quarter of the final determined to make a fast start. Enya Magurie set the tone early bombing a deep three to open the scoring before Ciara McCreanor jumped into the passing lane to pick up a steal and convert an easy layup. Before the Lakers could settle into their game they were facing an 8-0 deficit. A Jennifer Duffy basket gave the Lakers some hope before a fantastic McCreanor three-point play closed out the quarter with the Elks firmly in control 11-2.
The Lakers 1-3-1 zone was reasonably effective slowing the tempo and limiting the Elks scoring but it was on the offensive end that the Monaghan side were struggling. Jennifer Duffy was the early exception with strong takes to the basket allowing her to pick up the Lakers first 6 points. However, Enya Maguire was in imperious form, continuing were she left off in the first quarter with another 6 points in the second to give the Elks a 19 to 9 half time lead.
Elks looked to pull away in the third quarter with their full court pressing defense creating turnovers and just when the Lakers thought they might have slowed down Enya Maguire her younger sister Erin came alive with two impressive baskets. The Elks were playing great team basketball quick ball reversals shifting the zone and going inside out for open shots.
Erin Hamill had impressed all weekend for the Lakers, battling on the boards with a soft touch around the rim and accomplished footwork when facing the basket however early in the final luck was not to be on her side with a number of strong moves just lacking the finishing touch. Her touch returned in the second half as she tried to lead a Lakers comeback with 8 second half points, 6 in the fourth, but another 4 points from Erin Maguire ensured the Elks always stayed in control and went on to win on a score line of 35-24.
Ulster Elks: Enya Maguire, Erin Maguire, Niamh Fitzpatrick, Ciara McCreanor, Aoibhean McCarvill Substitutes: Carla Collins, Jenny Collins, Grace Kennedy, Mia Choda, Emma Carlin,  Clare Glackin
Coach: Deordre Brennan
Assistant Coach: James Zuccaro
Top Scorers: Enya Maguire 15, Erin Maguire 10, Ciara McCreanor 8.
Muckno Lakers: Grainne Tibby, Jennifer Duffy, Sally Maloney, Sarah Burns, Erin Hamill
Substitutes: Shaunine Rice, Sally Maloney, Aoife Cullen, Megan McArdle, Emma Reilly, Sadbh Kelly, Aoife Flanagan
Coach: Gerry Smyth
Top Scorers: Erin Hamill 9, Jennifer Duffy 8, Grainne Tibby 3
HT: Ulster Elks 19, Muckno Lakers 9
MVP: Enya Maguire (Ulster Elks)