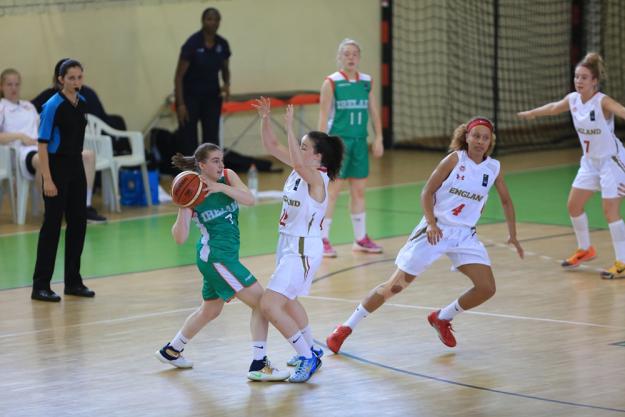 IRELAND'S Under-18 women racked up a massive 100 points as they trounced Macedonia to make it two wins out of three in the European Championships in Sarajevo on Monday evening.

As always, the Irish ladies victory owed much to good old fashioned hard work - and an unrivaled ability to sniff out rebounds.

Coach Liam Culloty's side spread the play, spread the work load, spread the scoring - and spread-eagled the outclassed Macedonians in this Group C encounter.

Inside, the twin towers of Claire Melia and Rachel Huijsdens would both be in double figures in the rebounding stakes long before the final whistle - in Melia's case, she had 11 points and 11 rebounds at half-time!

Amazingly, Melia did the bulk of her scoring from the free-throw line. Unable to keep her off the glass at either end, Macedonian took to fouling the Portlaoise Panther.

Unfortunately for Macedonia, their Hack-a-Claire tactic paid little dividends, as the Irish centre was all but perfect from the stripe to lead her team's first-half onslaught on the opposition basket.

Melia connected on seven of eight free-throw attempts (88%) meaning she would achieve the rare feat of amassing her 11 points off just four field goal attempts.

After the turnaround, Melia had the luxury of ramping the intensity down to fourth gear as Ireland took a seat behind the red-hot shooting of Louise Scannell.

Glenmire guard Scannell could hardly miss in the second half and, before her day's work was done, she had helped herself to 18 points and four rebounds - two of them on the offensive end - and somehow found time to come up with a pair of steals also.

While Melia and Huijsdens took care of business inside, the Irish women also caused plenty of damage from the perimeter.

Aine McDonagh knocked down a three-pointer on her way to an 11-point game that was a model of efficiency; Sorcha Tiernan also had her range from behind the arc, hitting a pair from long-range in a fantastic all-round game for the Liffey Celtics lady who came off the bench to finish with 13 points, eight assists and five rebounds.

Skipper Anna Maguire, Catherine Connaire and Amy Murphy also got in on the act from downtown as the Irish team ran riot on the offensive end.

All over the court there were eye-catching performances from the ladies in green. Scannell, Tiernan, McDonagh and Melia all finished in double-figures in the points column while Brunell's Murphy almost joined them with a nifty nine points of her own.

Scannell, who was not among the starting five, shot the lights out upon her introduction, hitting nine of 14 from the field (64%) on her way to that game-high 18 points.

Ireland now go full steam ahead in search of their third win of the tournament when they face Estonia on Wednesday afternoon.