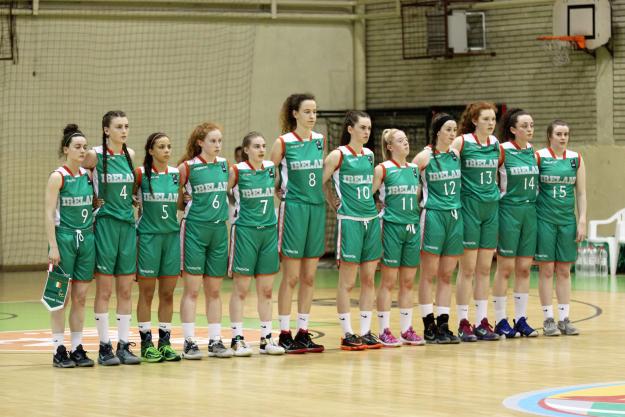 It was a short turnaround for the Irish u18 girls who less than 24hours after suffering a heart-breaking loss to Sweden had to pick themselves up to face a strong Polish side in the first 5th-8th place classification game. These were two very evenly matched sides but it would be Poland who would finish strongest in last 2 minutes and edge a 75-71 victory in a pulsating game of basketball.

Both sides started at a frantic pace and that was epitomised by Irish livewire Louise Scannell who would score on a drive to the basket before adding points at the free throw line and from behind the three point line on her way to an impressive 8 point first quarter haul. Both sides were trading baskets and there was no daylight between the teams, Aine McDonagh doing the damage for Ireland from range while Claire Melia looked back to her best dominating in the paint and scoring at the rim.

The second quarter had Poland step up the pressure on the Irish girls, restricting them to only three made field goals in the period. This allowed them to take a 7 point lead into the half. One advantage of the Sweden loss the night before was that the Irish girls were all too aware of how a game games can change so quickly and they came out battling hard in the second half. Melia was stamping her authority all over the game en route to an impressive 24 points, 15 boards, 6 assists and 4 steals and she was instrumental in a 9-0 Irish run that would tie the game at 40 points apiece mid-way through the third. However just when things were looking up Poland responding with a 10-0 scoring run of their own but the Irish heads did not drop as this remarkable game see-sawed back and forth, Ireland embarking on another 9 point run to take them within a point of the lead.

Ireland started the fourth looking the stronger team continually making Poland run offense and take rushed shots at the end of the shot clock. On offense Ireland were getting out on the fast break and some fantastic passing out of the post by Verity OâConnor was setting up open shots.  Aleksandra Macheta, Catherine Connaire and Anna Maguire were the recipients of some of these fine Irish passes and they duly converted to put Ireland up by three, 57-54. Both sides would then go basket for basket as the lead exchanged hands a number of times. A huge Anna Maguire three pointer put Ireland up by one with only a couple of minutes to go but it would be the last time Ireland would lead as back to back Polish baskets gave them just enough breathing room to close out the game and win by four.

Ireland will now face off versus Germany tomorrow for a battle for a 7th place finish.