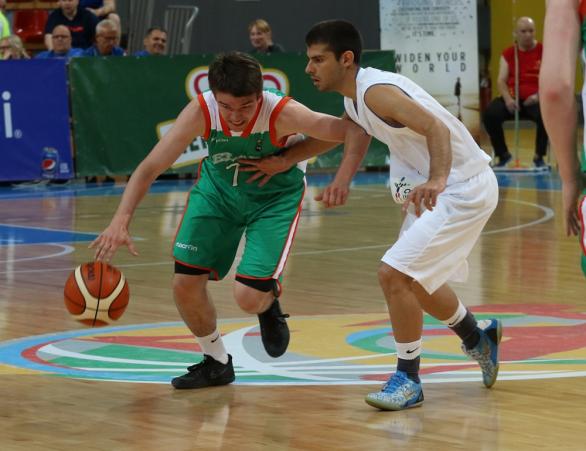 Going into this game versus the tournament hosts the Ireland u18 men knew that in order to keep hopes alive of progressing to the quarter finals a win was vital but despite an assured start Macedonia would prove too strong in the second half and handed Ireland their second defeat of the championships.

It was the Irish who started brightest with Eoin Rockall leading the charge, the Maree point guard was in imperious form early in the game with effortless looking drives to the basket causing all sorts of problems for the Macedonian defence and when they did close off the driving lanes Rockall demonstrated the ability to strike from deep as he connected with a long range three pointer to put Ireland up 10-1. The hosts looked a little shell shocked but soon battled their way back into the game in what was to prove to be a high scoring and exciting first period. Donal Ring was key on offense for Ireland knocking in two threes of his own as the sharp shooter helped ensure Ireland would hold onto a slim lead at the end of the first, 31-28 to the Irish.

Ring continued his hot streak into the second period as he set his feet and rained in three more three pointers on his way to a 17 point effort going 5 for 8 from behind the line in a fine display of shooting. Ireland looked to be edging the contest as they went in at the half up by five on a score of 51-46.

The game changed in the third, and not the way the Irish fans In Macedonia would have hoped. The Macedonians were much more aggressive and it would lead them going to the line for 16 free throw attempts in the quarter where they shot a lethal 82% for the game. One bright spark in the third for Ireland was the play of Adam Drummond as the Neptune man found his scoring touch, getting to the rim and converting on three field goal attempts.  However with Ireland in foul trouble Macedonia had taken control of the game and led 80-69 at the end of the third.

Nenad Dimitrijevikj was at the heart of everything for Macedonia not only did he score 14 points himself but the star point guard also handed out an incredible 12 assists as he penetrated and kicked time and time again to open teammates. Ireland battled hard in the fourth but the size of the Macedonia team made it hard for the Irish to stop them on the defensive end and the hosts ran out winners by 96 points to 82.