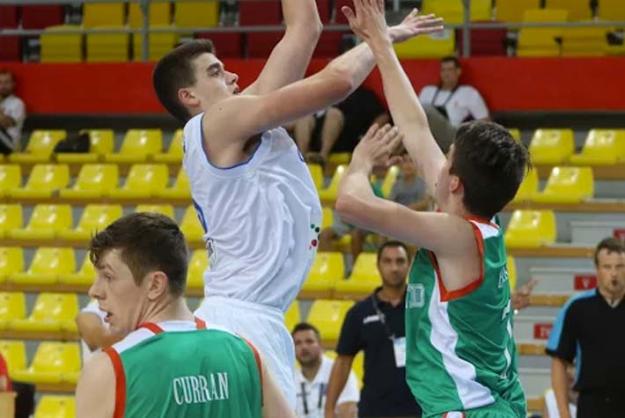 Tuesday August 2nd, 2016
FIBA U18 European Championships - Division B (Group A)
Ireland 55, Hungary 94
Sports Centre Jane Sandanski, Skopje, MKD
Defeat for Ireland in the penultimate game of an ultra-competitive Group A at the FIBA U18 European Championships in Skopje.
Head Coach Joey Boylan made one change to his starting five with Conor Curran coming in to unsettle Hungary in the first quarter. Curran got Ireland off the mark from the free-throw line midway through the first quarter while for the second game in a row, Tariq Guebaili had back-to-back assists to kick start Irelandâs challenge but Hungary were up and running and 22-08 clear for the first quarter.
Hungary came into the game as one of only five unbeaten teams in the tournament and Ireland were at full tilt to try and keep them in check. Robert Sullivan drained a two with Irelandâs first possession of the second quarter before a 10-0 run put Hungary in full control.
Eoin Rockall opened his account in the 15th minute as did Adam Heaphy when he let fly with a three-pointer late in the second. Hungaryâs average height of 6â5 game them a couple of inches to spare and a clear advantage on the boards at both ends.
Ireland trailed 43-18 at the break and fell further behind as Krisztofer Durazi completed his double-double early in the third quarter. Donal Ring lifted the siege with a couple of baskets and Adam Drummond was rewarded for his minutes on the floor with his first basket.
Hungary led 67-33 heading into the fourth assured of maintaining their unbeaten run but there was still time for a nine point quarter from Matt Treacy.
Group A contains three of the top five shooting teams in the tournament (Bulgaria 1st, Hungary 2nd and Poland 4th) while Ireland can be satisfied that they came into this game second in terms of steals with only four of 24 teams turning the ball over less.
Poland are Irelandâs last Group A opponents on Wednesday at 20:00 before the classification games begin on Friday.