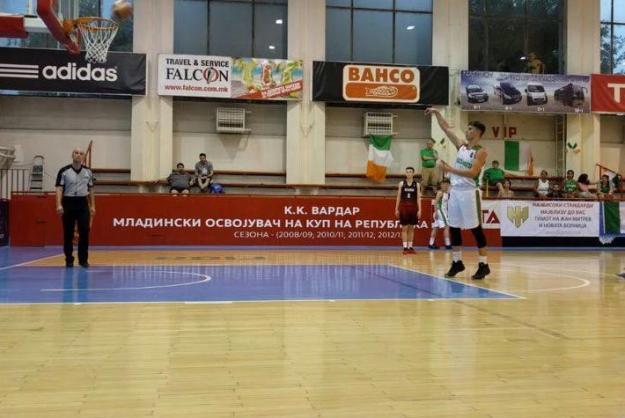 Saturday August 6th, 2016
FIBA U18 Men's European Championships Division B â 21-24 Classification Game
Ireland 68, Albania 68
Skopje, Macedonia
Ireland's U18 Men were beaten 69-68 in agonising fashion by Albania in the penultimate round of the 2016 FIBA European Championships. Ireland led by 15 points with 3:48 remaining but faltered down the stretch as the Balkan nation pulled off a 13-2 run for their first win of the tournament.
There was only one word Head Coach Joey Boylan had to sum up the mood at the final buzzer. âDevastated,â he said. âWe lost by a point to Albania. We should have won it. We were the better team and had better players and we should have won it.â
The squad will need to pick themselves up for the Classification Game for 23rd place against Cyprus on Sunday at 11:00am. The Cypriots beat Ireland 67-61 in Group A on the first day of the tournament.
Ireland were poised for their first win of the tournament as they reversed a five point deficit for the first quarter to lead 37-32 at half time. Adam Drummond's 26 points in total kept him in the top five scorers in the tournament and the 15 points he scored in the first half were a major source of confidence for the Irish.
Tariq Guebaili's fast-break dunk earned Ireland's lead in the second quarter and Brian Ashton's layup helped to defend it and a12-0 run either side looked to have Ireland in the driving seat.
It was Drummond who followed up from Oisin O'Reilly's basket to give Ireland their biggest lead of the game after 36 minutes of basketball. Albania's 37 points off the bench were to prove crucial as was a shooting percentage of 46% compared to Ireland's 34%. Conor Curran finished the game with seven points, eight rebounds and three assists but the focus for Boylan's squad must now be on emptying the tank against Cyprus.
Ireland: E. Rockall* (7),M. Treacy* (7), A. Drummond* (26), C. Curran* (7), D. Ring* (4), T. Guebaili (3), B. Ashton (2), R. Sullivan (6), S. Commins, O. OâReilly (6), A. Heaphy, D. Heaney.
Box Score: http://live.fibaeurope.com/www/Game.aspx?acc=0&gameID=99106&lng=en
Return to FIBA European Championship Game Zone