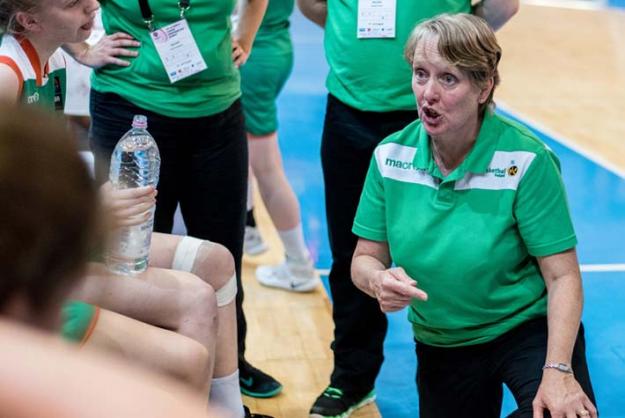 Friday August 12th, 2016
FIBA U16 Women's European Championship Quarter-Final
Ireland 53, Poland 60
Oradea, Romania
Irelandâs U16 Women have their sights firmly set on a best ever finish in the FIBA European Championships, despite defeat in todayâs quarter-final to Poland. Maeve Colemanâs side were beaten 60-53 by a bigger more experience side and will face Luxembourg at 11:30am on Saturday in the 5-8 classification round.
âFifth is our target,â said Coach Coleman, âso weâll talk about it and prepare for Luxembourg. The girls showed true grit and character and they still have everything to play for.â
Poland had the better start with a 5-0 before Dayna Finn completed a three-point play and followed up for a steal for Enya Maguire to feed Maeve O Seaghdha on the fast break. It was Maeve Phelan who really settled Irish nerves and gave her side the lead with after seven minutes.
Poland led 15-14 for the first quarter and pressed hard in the second 11-2 run. A devastating fast-break over the top was hurting the Irish so they switched to a zone defence and rallied well with Alison Blaney and Nicole Clancy. Annaliese Murphy landed a three-pointer on the buzzer of half time to reduce the deficit to 31-27.
Fresh from featuring for Polandâs U20 side in Division A of the FIBA European Championships, it was point guard Anna Makurat who saw Poland home with timely three-pointers in the fourth quarter. They needed to be at their best to advance as twice Ireland fought their way back into the fourth quarter. Maeve Phelan levelled the game with 8:46 left and Nicole Clancy made it a one-score with just 04:38 on the clock, but Polandâs 22 steals and four blocks helped to keep them in front.
Ireland: D. Finn* (9), E. Maguire* (10), A. Blaney* (2), B. Power Cassidy*, M O Seaghdha* (2), N. Masterson (2), M. Phelan (14), N. Clancy (5), A. Flynn (2), M. Cannon (2), A. Murphy (5), E. McCloskey.
Box Score: http://live.fibaeurope.com/www/Game.aspx?acc=0&gameID=99149&lng=en