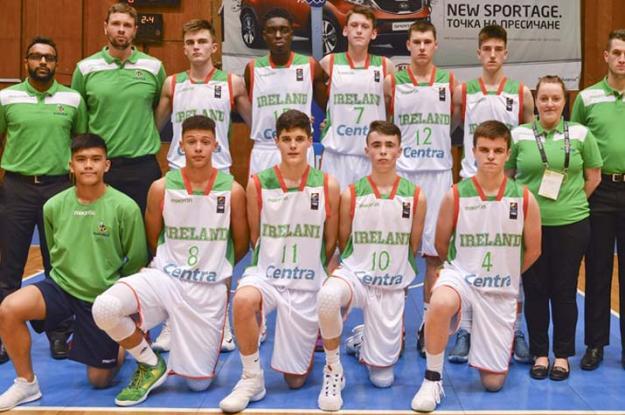 Thursday 18th August
FIBA U16 Menâs European Championship - Division B 17-24 Classification Game
Ireland 76, Luxembourg 74
Sofia, BUL
Ireland came from 10 points down in the last quarter to beat Luxembourg 76-74 and move into the 17-20 Classification Games at the FIBA U16 European Championships.
The winning basket came with 19 seconds left as James Beckom snatched a loose pass to run in on the fast-break. It was Irelandâs second win of the tournament and Coach Nabil Murad feels thereâs more to come from the squad.
âIt was a nitty gritty gameâ, said Murad. âWe did not play to our full potential but the team really came together heading down the stretch and made some big baskets, so onto the next one.â
A strong start from Ireland through Cian Heaphy tailed off midway through the second quarter to give Luxembourg a 45-39 point lead at the break. The countries had met in the Dussmann Trophy warm-up tournament with the Irish winning comfortably.
That gave Luxembourg the added motivation and the game was theirs to lose with the score at 62-52 with 10 minutes left.
Ireland went looking for three-pointers to get close early in the fourth. Paul Kelly was the first to connect and David Murray got the next three baskets but there was still six points between the sides with five minutes to go.
Kris Arcilla capped a huge game with the next score and Darragh OâSullivanâs three-pointer gave Ireland real belief they could complete the comeback after two games where strong fourth quarters failed to produce a result.
David Murrayâs 10 point quarter gave Ireland the lead and they were almost home when Robert Cahill made his first basket of the game.
Luxembourg brought the game back to 74-74 and it took Beckomâs dramatic intervention to nudge Ireland back in front. Mark Convery caught the all-important rebound on the next possession and Murad still a timeout left to help maintain control.
âWe should have started off way stronger that we did,â said Captain Darragh OâSullivan. âWe were sluggish at the start but towards the end we swung the ball around and got our shots off.â
Ireland: P. Kelly (5), C. Heaphy* (15), R. Cahill (3), J. Beckom* (5) , K. Arcilla (16), S. Hannigan, D. OâSullivan* (7), M. Convery (3),  J. Moran DNP, D. Murray* (18), M. Amadasun (4)*.
Box Score: http://live.fibaeurope.com/www/Game.aspx?acc=0&gameID=99258&lng=en
Click here to return to FIBA European Championship Game Zone