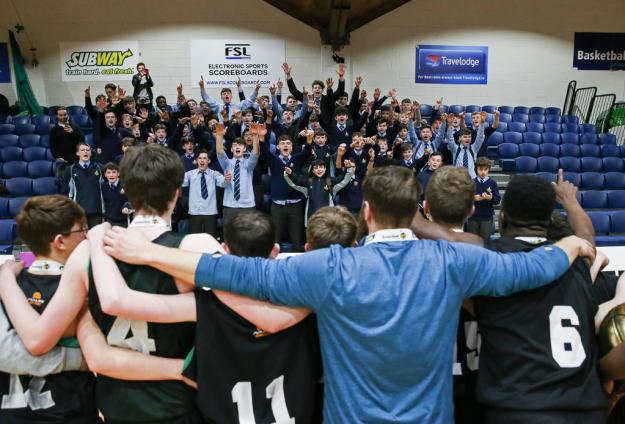 Subway U16 B Boys Schools Final

Subway U19 B Girls Schools Final

Subway U16 B Girls Schools Final

SAMMI FAJANA was the spark that ignited a superb win for Colaiste Pobail Setanta (Dublin) this morning in the SUBWAY U16 B Boys Schools final at the National Basketball Arena.

Fajana netted a whopping 24 points to drive his side to a 47-61 point victory.

It was Castleblayney who had the better of the opening exchanges, with Robbie Hanratty and Ciaran McKearney working the ball around well early on, but Setanta soon found their feet with Fajana, Conor Thornton and Adejare Adelani working the ball well around the key to open up the Castleblayney defence and drive into a commanding 6-20 lead at the end of quarter one.

Fajana showed off his range in style throughout the second, netting baskets under the boards and from the three point line. The introduction of Josh Timog for Setanta proved crucial as the pacey guard played bigger than his side and added vital points on to Setanta’s scoreline.

Castleblayney showed their grit and dug deep with Robbie Hanratty Ciaran Duffy proving to be vital through the centre, netting some key scores in the second quarter but Setanta were still comfortable at the half, 17-46.

Quarter three was a great quarter for Castleblayney as Hanratty, Irwin, Duffy and Ciaran McKearney all got in on the scoring to pull some points back for their side, and showed off some great defensive skills in the face of a commanding Setanta offence to end the quarter 25-53. The Monaghan school never gave up throughout but in the end, a stylish display from Fajana, Timog, Adejare Adelani, Thornton and Milosh Kutijevic was just too much for them and Setanta were crowned winners, 47-61.

LORETO COLLEGE CRUMLIN drove home to an impressive 38-57 point win in the SUBWAY U19 B Schools Cup final this morning, overcoming Gort Community School to be crowned champions.

Darren McGuiness’ charges were in control from the off, with fantastic performances from MVP Claire Quinn Nealon, Niamh and Ciara White proving to be crucial for the team. Having won the U19 C Girls League last year, Loreto had no hesitation stepping up to the mark in the U19 B this year, and with strong performances throughout the team, opened up a gap early on to lead 7-15.

It wasn’t all one way traffic though, as Ciara Helebert stole the show for Gort, proving crucial on both offence and defence and was the driving force behind her team’s display.

Loreto continued to dominate as the second quarter got underway, and strong defensive displays kept Gort to just five points for the quarter, while the Dublin team stretched out their lead in style to go in at the break 12-27 to the good.

Gort really began to shine in quarter three, with Helebert, Ava Lynskey and Olga Burke all stepping up impressively to meet the challenge. However Niamh and Ciara White and Reanne Devlin were determined not to let Loreto’s lead slide, and added more to their tally to see them into the last leading 22-42.

Gort continued to battle hard in the fourth, with Helebert once more leading the way. Good scoring from Kate Tarpey and Ava Lynskey kept the scoreboard ticking over, but it was to be Loreto’s day as Reanne Devlin, Niamh White and Nealon show skill, talent and flair to secure them a memorable victory in the end.

Onuoha netted a massive 25 points to help his side on their way to victory.

Coláiste na Coiribe started the second quarter much better and they were lead by the immense talent that is Oisín Ó Gormaile. Multiple steals from him lead to fast break scores for the boys from Galway. Strong rebounding from Castleknock’s Ulo Eruma Gborie and UG Roland-Onuoha lead to multiple scores, especially on the offensive end. This is what separated the two sides throughout the game. St Vincent’s lead 22-25 at the end of the first half.

Gborie and Onuoha were once again a huge factor on the offensive boards and they helped their team immensely with a mix of scores, rebounds and blocks. Ó Gormaile again, was taking advantage of his knowledge of the court and picked up a couple of steals.
Coláiste na Coiribe’s Cronan Mac an Bháird made three huge shots in succession towards the end of the quarter to have the score all tied up at 38-38.

The fourth quarter was a nail-biting experience for everyone in attendance at the Arena. St Vincent’s and Coláiste na Coiribe traded scores right up until the last minute of the game. St Vincent’s stars Gborie and Onuoha exchanged scores with Ó Gormaile and Mac an Bháird to put on a show for the crowd.
Eventual MVP UG Roland-Onuoha put up a huge three pointer to break the deadlock with one minute remaining on the clock. This didn’t phase Coláiste na Coiribe however, as they attacked with the same ferocity as they had all game.

A huge block from St Vincent’s Ulo Eruma Gborie started to put doubt in the minds of the Galway lads but they kept the intensity. They had multiple free-throws in the final minute but were unable to convert. Oisín Ó Gormaile had a shot at the buzzer to win the game but good defence from St Vincent’s Castleknock made it difficult for him and put an end to a thrilling final, with the Dubliners winning by a single point, 50-51.

GILLIAN WHEELER and Miah Ryan were the stars of a glittering performance for Cross and Passion College Kilcullen as they stormed home to a 45-56 point victory over Colaiste Oiriall (Monaghan) in the SUBWAY All Ireland U16 B Girls Schools Cup final.

Wheeler was the difference between the two sides in the opening quarter as she netted nine of her side’s 13 points to take a five point lead at the end of the first.

Caoimhe Nic An Bhaird and Aisling Ni Ghallchoir of Colaiste Oiriall found their feet in the second quarter though and it was well and truly game on for what would prove to be a fantastic showcase of schools basketball. The action was end-to-end throughout the second, with the teams going in at the break just three points apart, 18-21.

Gemma Nic Seain and Lara O Mairtin were the standout stars for the Monaghan side throughout the second half, working hard under the boards to help Nic An Bhaird and Ni Ghallchoir and with the Arena’s roof almost lifted off with supporters’ cheers, the game remained neck-in-neck with both sides showing off their talent from around the key. Despite a spurt from Kilcullen in the third, Colaiste Oiriall were not giving up, and threw everything at them in the last and it was here where Miah Ryan really shone as she finished off numerous fast breaks in style and wove her way around the defence to find the basket with a flourish to give her team a 45-56 win in the end after a truly thrilling final.