Hat trick of wins for Irish U15 men v Wales 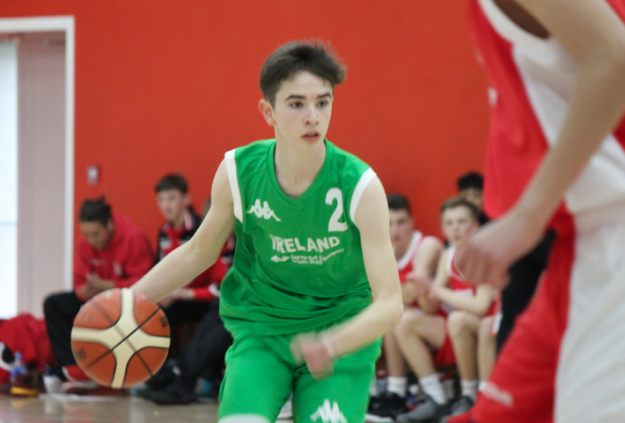 Ireland Under 15 men welcomed Wales U15s to Galway this week as part of a three-game international friendly series.

Ireland got the first of their three-game International friendly series with Wales off to a flying start on Monday evening with a dominant and well balanced display in Galway.

The boys in green stormed into an early lead with a good spread of scoring early on to lay down a marker of things to come. Good defense also saw Wales struggle to get off the mark, and the clock had ticked under the midway point in the first before they finally opened their scoring with a well-taken three. The pace and strong defence of the Irish side though was too much for the visitors at that early stage, and Ireland finished out the quarter 31-5 points to the good.

Ireland maintained the pace throughout the second quarter, with solid inputs from all players on the court. High scoring from Tommy Coogan and Eli Lenihan kept the scoreboard ticking over, giving Wales a mountain to climb as they went in at the break trailing to the home side 55-13.

A reinvigorated Welsh team came out in the third quarter, with some nice scores from the outside coupled with some well-taken jump shots to see them add 12 points to their tally in this quarter. Ireland maintained the intensity though, and were still well in the lead at the buzzer, 81-25. A much closer fourth quarter saw Ireland outscore Wales by just two points (16-14), but the damage had already been done with superb work by the Irish squad throughout the match ensuring a comprehensive 97-39 point victory in the end.

The Irish Under 15 squad secured their second win in two days over Wales on Tuesday evening when they overcame a sluggish opening half to pull away from their visitors. Some good outside shooting from Wales early on had perhaps added to nerves in the Irish camp, with poor defence and turnovers the story of the opening couple of exchanges.

The second half saw a change in tempo with a smaller line up taking to the floor for Ireland, and they began to execute on the offensive side of things while tired Welsh bodies began to turn the ball over repeatedly against a strong Irish bench.

All in all another good outing for the team with this test series set to prove important for both players and management on their journey towards the European Championships in 2018.

The Irish Under 15's completed a clean sweep of Wales in the third of their test series games in Galway on Wednesday.

Another packed St Mary's gym witnessed a fantastic back and forth encounter with just seven points between the sides at half time after some scintillating offensives in the first half by both squads.

Wales went with a big line up, and Ireland for large parts struggled to deal with the size difference with Wales running in some easy baskets to go alongside some outside shooting.

However, numerous different players contributing on the offensive end for the Irish and some smart play in the fourth quarter allowed the boys in green to complete their hat-trick of victories.

All in all, much had been learned by the coaching team about their squad over the last few days both on and off the court with the entire Welsh and Irish teams being based on the grounds of St Mary's allowing for a positive experience for all involved