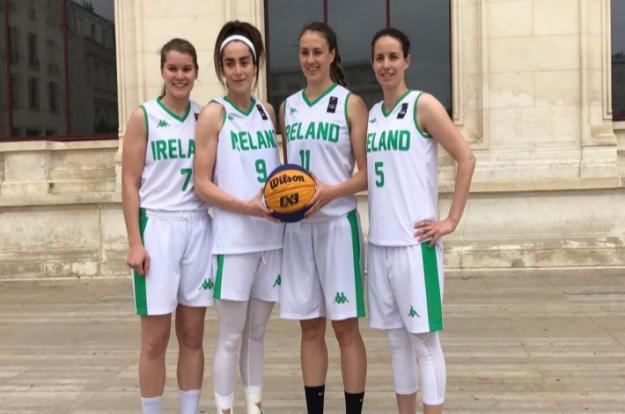 FIBA 3x3 World Cup winners, Russia, put a firm stop to Ireland’s march through the Europe Cup qualifiers in France this evening, as they put in a clinical display to win out by 17-8 in the semi-final.

Niamh Dwyer, who has been impressing for the women in green since the tournament tipped off yesterday, was on form again this afternoon, bagging seven of Ireland’s eight points in the semi-final.

As the clock ticked under five minutes though, Russia began to stretch out their lead, going on a six-point run before Gráinne Dwyer was on hand to pull a basket back for the Irish.

There was no doubting why the Russian side had been crowned FIBA 3x3 World Cup champions just a few days ago though, as they continued to dominate right until the final buzzer to book their spot in the final against Spain.

Speaking afterwards, Coach Hall reflected on what was a hugely successful tournament for the Irish women: “This was a very successful tournament for Ireland. We came here with the goal of qualifying for the FIBA 3x3 Europe Cup in Amsterdam and we achieved that. It’s been a learning curve for us here and the experience of playing against some of the top teams in the world will really stand to us over the coming weeks. We’re really looking forward to Amsterdam now.”

It's all over in France and the Irish squad reflect on a hugely successful tournament for the squad #3x3Europe #GreenShoots @FIBA3x3 pic.twitter.com/lD2XQtFlfp

There will be big celebrations in France today as the Ireland Senior Women’s 3x3 team caused a major upset in the quarter-finals of the FIBA 3x3 European Cup qualifiers this afternoon, with a 13-10 point win over 3x3 World Cup bronze medallists Ukraine.

The win has not only ensured a spot in today’s semi-finals for the squad, but it has also earned them a place at the FIBA 3x3 Europe Cup which will take place in Amsterdam from July 7-9th.

Gráinne Dwyer got the scoring underway for Ireland in the quarter-final this afternoon, and while Ukraine responded straight away, Dwyer was on hand to punish at the next time of asking. Points from Niamh Dwyer, Fiona O’Dwyer and Claire Rockall kept the scoreboard ticking over for the Irish to push them into an 8-3 point lead midway through the game.

A late rally from Ukraine teed up a nerve-wracking finish though, as they came back from an 11-6 deficit to close the game to just two (11-9), but the cool heads of Niamh and Gráinne Dwyer ensured there was no room for defeat, and saw Ireland home to a memorable 13-10 point win in the end. They will now face Russia later today in the semi-final.

Speaking about the news, Head Coach, Matt Hall stated: "It was a fantastic performance by the team today. They learned a lot from their group games against Czech Republic and Poland yesterday and came out here this afternoon knowing that they were able to cause a major upset and that’s exactly what they did. The enormity of this win is unbelievable. Ireland is ranked 48th in the world at 3x3 women's basketball, but are proving themselves more than capable against teams who are ranked in the top 10 in the world. It’s truly a massive achievement.

"We are absolutely thrilled to have qualified for the FIBA Europe Cup in Amsterdam and cannot wait to be there," he continued. "But for now, our focus remains here in France as we face Russia in the semi final today."

Ireland took the points from their must-win clash with Poland in the second game of the FIBA Europe Cup qualifiers in France this afternoon, running out 14-9 point winners in the end.

Super scoring from Niamh Dwyer was one of the main talking points of the game, while brilliant blocks and defence from Fiona O’Dwyer ensured that the Polish team just could not penetrate the Irish line.

Niamh Dwyer was first off the mark on the scoreboard, netting a quick early basket, before adding to her tally from outside to put Ireland in a 3-1 lead early on. A lovely flick inside from Claire Rockall to the waiting O’Dwyer saw Ireland increase their lead, and O’Dwyer added another to her tally seconds later to keep Ireland in front.

Poland came back to within one point midway through the game, but sisters Niamh and Gráinne Dwyer stepped up to the challenge in style, to send Ireland into a 9-4 lead. Two massive blocks by O’Dwyer under the basket kept Ireland’s lead intact, and Niamh and Gráinne added points before Claire Rockall had the final say for the Irish to see them home to a 14-9 victory and teeing up a quarter-final clash with Ukraine on Saturday.

“Crucial misses at crucial times and lapses in defence cost us the game,” admitted Ireland’s Niamh Dwyer, after the Ireland Senior Women’s 3x3 team lost out to the Czech Republic this morning in their first Europe Cup qualifier game in Poitiers, France.

Ireland started extremely strong with Fiona O’Dwyer getting the scoring underway with just three seconds gone on the clock. Czech Republic were quick to reply, and it was score for score for the opening minute and a half with Niamh Dwyer adding to the Irish team’s tally.

The Czech side settled into a steady rhythm though, and worked some good back door plays to go on a six-point run and open up an 11-4 lead with three minutes gone. O’Dwyer got the Irish back on the scoring with a well-taken outside shot, and added two more baskets in quick succession to close the gap back to three (11-8).

Despite good defence by the two Dwyers and Claire Rockall though, Czech Republic had an answer once more, and some clever passing off the screens saw them move into a 16-9 lead with two minutes left to play, punishing Ireland for not converting their possession.

Gráinne Dwyer added more to Ireland’s scoring, but it just wasn’t enough and it was Czech Republic who took the win in the end, 19-14.