FIXTURES & RESULTS: Ireland U16 and U17 women v GB 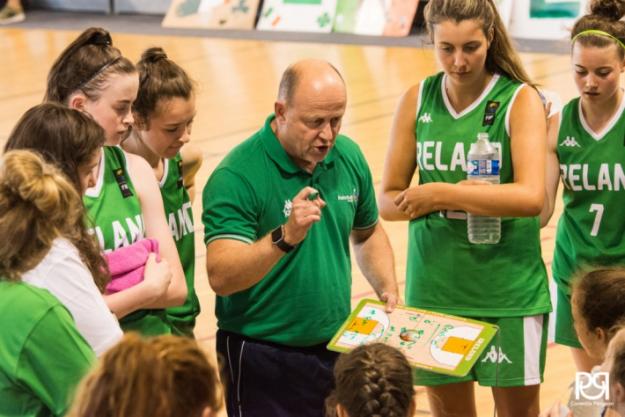 The Ireland Under 16 and 17 women’s teams welcome Great Britain to Dublin this weekend for a series of international friendly games.

The matches will tip off in Oblate Hall and Colaiste Éanna from the 7-9th July, and will see Ireland face off against their near neighbours who have also been regular opponents down through the years.

Games between the sides have always been close, and there’s no doubt that this will be vital preparation for the squads.

Games will take place at Oblate Hall, Inchicore and Colaiste Éanna, over the weekend, with donations accepted on the door..

Ireland Under 16 and Under 17 Women’s team Results:

Ireland Under 16 and Under 17 Women’s team fixtures:

Great Britain U16: 52
Ireland U16 Women put in an inspired defensive display in the opening game of their test series against near neighbours, Great Britain, to run out 64-52 point winners.
In a closely fought first quarter, Ireland found it hard to convert their possession, but eventually settled down to finish just two points down at the first buzzer. Alex Mulligan, Ciara Bracken, Lauren Darcy, Katie Williamson, Katie Walshe and Lainey Nolan all got on the score sheet and Ireland's 'havoc' defence elicited 11 Great Britain turnovers.
The second quarter mirrored the first, but Ireland were able to establish a three-point lead at the half 33-30. Anna Lynch, Ciara White, Mia Furlong and Erin Maguire all scored which meant 11 of 12 players were now on the scoresheet and Niamh Kenny did an excellent defensive job. A respectable 34% shooting and 82% from the free throw line assisted Ireland's lead.
The second half had been Ireland's Achilles heel in recent games, but on this occasion, they were determined to put on a display with the raucous support of the home fans. Ireland led 50-46 with Abbey Flynn on 10 points and Ciara Bracken on 8 leading the scorers. Ireland's defence never relented and by this stage, GB had made 30 turnovers.
As the fourth quarter progressed, it became apparent that Ireland's recent trips to Minsk and Nantes had now given them the experience to close out a famous victory. They held GB to just six points and a big three-pointer from Ciara White in the last 90 seconds sealed the victory.
Andy Gill, Ireland's head coach commented: "We needed a win after our recent losses, albeit against top quality opposition. GB were long and athletic but they were playing their first game whilst this was our 15th. We missed way too many easy lay-ups and perhaps the score could have been more convincing, but our defence was relentless. We all look forward to game two on Sunday."
IRELAND: Abby Flynn 11, Katie Walshe 10, Ciara White 9, Ciara Bracken 8, Mia Furlong 8, Lauren Darcy 5, Katie Williamson 4, Erin Maguire 2, Alex Mulligan 2, Anna Lynch 2, Lainey Nolan 2, Niamh Kenny 1

Ireland Under 16 Women played Great Britain (GB) Under 16 Women for the second time at a well-attended Oblates Hall in Dublin on Sunday morning. A combination of uncompromising defense and transition offence saw Ireland take the win at 65 – 55.

The first quarter, and in fact the whole game, was a carbon copy of their first encounter on Friday with GB getting some good looks inside and Ireland missing a number of lay-up opportunities. As the quarter moved on Ireland’s full court defence continued to pressure GB and forced 10 turnovers to Ireland’s 4. Abby Flynn had a quick-fire 7 points supported by Ciara Bracken, Anna Lynch, Lainey Nolan, Katie Walshe, Alex Mulligan and Katie Williamson. At the end of this period Ireland led 19-15.

As the second quarter progressed, Ireland’s security with the ball and the constant pressure applied to GB, leading them to commit a further 10 turnovers, meant that they went into the break 35-26. Ireland continued to spread the scoring load with Ciara Bracken adding five more, a three from Lauren Darcy, a two from Erin Maguire and a further four from Katie Williamson. Mia Furlong and Niamh Kenny continued to distribute the ball and play hardnosed man-to-man defence.

From the onset of the third quarter GB came back a more determined outfit closing the gap to three after five minutes and ending it down 43 - 48. Ciara White had added four points and the game was turning into a real dog fight, with GB looking much more secure in attack when they were able to break Irelands press. However, Ireland’s ability to force turnovers never stopped and GB were now up to 30 with Ireland only turning it over twice in the same period.

The fourth quarter saw Anna Lynch make a couple of massive three's and Ireland grab a 9 point lead with five minutes to go. Ireland’s recent experiences in both Minsk and Nantes meant that, despite some difficulties completing their offences, they had the composure to see out the game and run out winners 65-55.

Coach Andy Gill commentated. 'What this game showed is the worth of our tough games in Minsk and Nantes where we played A league competition. We are far from the finished article and extremely ragged in our offensive execution but, we have developed a relentless full court defence that we are able to maintain for 40 minutes. Over the two games GB shot far better than us but we forced 83 turnovers and were able to shoot at a percentage that gave us a chance to win. We have developed a much better composure on the ball and when we make a mistake we are able to recognise it, learn from it and move on. We look forward to the tough six games we have over the next 10 games. It will be a test of stamina and resolve but one we are relishing. These girls do not know the meaning of not playing hard'.

It was a day of mixed fortunes for the Ireland U17 Women's team on Saturday as they took one win and one loss against Great Britain.

In the first game, Ireland started strong, jumping out to an early lead with some forced turnovers and strong finishing in the post. Ireland were up seven going into the second quarter, but GB found their rhythm and increased their defensive intensity. This led to some contested looks and late clock options. Ireland maintained a four-point lead at the half, but knew they were in a tough contest. The third was a nervy affair with both teams missing some open looks and GB shading the quarter and reducing Ireland's lead to three points 37-34.

The fourth saw the resurgence of the Irish offensively. A very effective full court press with some great finishing in the post saw Ireland have their best quarter scoring 18 points and finishing out eight-point winners on a score line of 55-47.

Coach Patrick O'Neill said after the game: "I'm really pleased with the mental toughness shown. The ladies watched GB last night and worked hard to use that knowledge and find ways to stop them. Last weekend in Wales really stood to us, we had a belief in ourselves and knew that if we worked hard on defence, we would be close at the end."

In the second game of the day, it was a very different GB side that took the floor. Ireland were under a lot of pressure from the start and GB were having much more success in the paint. At the start of the second, Ireland were down one, 18-19. The second quarter saw Ireland struggle to get shots to drop, while GB were getting looks inside and finishing strong and increased their lead to nine, 29-38.

A poor second half - with Ireland scoring only 23 points in total - saw GB pull away to finish comfortable winners on a score line of Ireland 52 - 76 GB.

Coach O'Neill said: "We're very disappointed with the end result but saw some improvements in our offensive structure from last weekend, we struggled at crucial times to get shots to drop. GB stepped it up a notch in this game and we had a lot of difficulty in trying to contain their height and athleticism.

"This has been a great series for us and comes on the back of two great games in Wales last weekend. I feel we are learning more about ourselves each game and taking a step up each time. As a coach, improvement each game is always a positive. We are looking forward to getting back to training and putting into place the lessons we have learned."