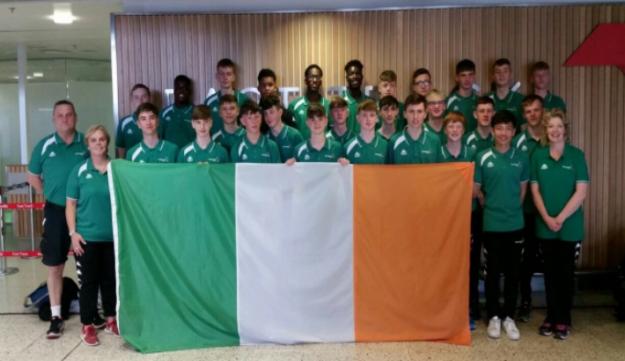 The Ireland Under 15 men’s team, who are supported by Irish Rail, traveled to Luxembourg to play a five-game international friendly series against the hosts. The squad, who have been training and working hard under Head Coach Mike Lynch, could not have asked for a better challenge at this stage of their development programme.

Ireland could not have asked for a better challenge at this stage of our development programme. Their first game saw them come up against a very well drilled U16 Luxembourg squad. Their fitness and conditioning work in preparation for the Euros was evident from the tip off.

Speaking afterwards, Head Coach Mike Lynch reflected ‘They were aggressive and played full court defense which caused Ireland to turn over the ball in the early stages of the game. Ireland struggled in the first quarter to put points on the board but looked more settled in the second half with good executions and great plays. We look forward to the opportunity to play them again today.’

Ireland’s second game of the day we came up against the U15 Luxembourg squad. Ireland had a great start running their sets and hustling on defense. Coach Mike Lynch said ‘We were really encouraged with the level of intensity we showed on defensive, and were able to maintain this throughout the game. After pulling away to a 10 point lead we lost some of our composure and let Luxembourg back into the game. We dug deep and provided both the home and away supporters with an exciting last two minutes. The players showed great maturity for their age and stuck with the game plan to come out on top with an 11 point victory.’

Ireland Under 15 men took on Luxembourg again in game three of their five-game international friendly series on Sunday. Head coach Mike Lynch reflected on the game saying,’The purpose of this trip was to see where our players are at in this development stage of the programme. We selected a different combination of players to play in the U15 game, testing players in different positions. As in game one we struggled to settle in the first quarter, and again our defense was slow to react to the speed of Luxembourg and their shooting accuracy. We eventually settled in and our sets were executed better.

Ireland entered into the second half trailing Luxembourg 22 to 34. Poor defense and unforced errors seen a very physical Luxembourg side pull ahead. However, in the final quarter with 4.22 remaining on the clock, Ireland addressed their level of intensity on both ends of the floor. Players went back on court with a different attitude. Their aggressiveness on defensive caused Luxembourg to falter. Ireland turned an 18 point deficit and pulled them back to within 4 points. The players have learned so much from this game and the coaching staff can be happy that the players showed great tenacity and desire to come from behind. The final score was Luxembourg 61 Ireland 55.

In game two of the day, Ireland Under 15’s took on a strong Luxembourg Under 16 team gearing up for the euros. With some changes to the squad along with video analysis of their previous game, the team took to the floor with a total different mind-set. From the tip off Ireland matched Luxembourg speed and aggressiveness causing the Luxembourg coach to use his time outs early on. Ireland dominated the boards which enabled them to work their transition offence more effectively.

Coach Mike Lynch had to say, ‘We ran our full bench to ensure all players had a taste of basketball against a team heading to the euros in less than a month. With an 8 point deficit at half time we went to the locker room happy with our performance in the first half. Our players fatigued early in the third quarter, a combination of the heat and the physicality of this Luxembourg team.’

Luxembourg’s prolific shooting accuracy proved too much for Irelands defence in the second half ending the game Luxembourg 83 Ireland 50. Lynch further noted ‘The final score does not reflect the performance of this U15 Irish panel. We could see that with more work on the finer details of the game, an improvement in fitness levels and conditioning that we are heading in the right direction with our team development.’

After a double defeat Sunday, game five seen the Irish U15 men take on a combined U15/U16 Luxembourg team. The squad regrouped and worked hard on aspects of the game they had struggled with in the previous four games in their early morning training session. After analysis of the previous four games management went with a squad that they felt would match up against this well drilled Luxembourg combination side.

Luxembourg opened the scoring and had four threes within the first quarter. Ireland struggled in the early minutes to find their rhythm but then settled by the end of the first with a 14 - 16 lead to Ireland. Ireland’s hard work on defense paid dividends in the second quarter containing the Luxembourg sharp shooters to 6 points. The full bench played and were rotated to match the speed and intensity of the Luxembourg side. Ireland went to the locker room with a 14 point lead (34 - 20).

The Irish team managed to maintain their intensity on both sides of the floor in the second half. Two dunks towards the end of the fourth quarter brought the supporters to their feet and finished off the game with a 75 - 56 win.

Head coach Mike Lynch reflected on the game, ‘Our sets were adjusted from the previous day’s games which paid dividends as we stretched our lead to 18 points. Having taken command of the game we ran all the bench who were also able to capitalize on our lead further.’

This has been a very beneficial experience to all players and management as they look forward to the challenge of three games against the Welsh U17 team this weekend in Gormanstown.