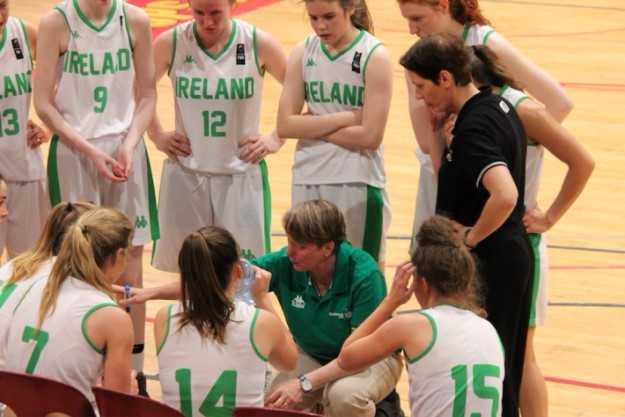 It was a second tough defeat in two days for Ireland Under 20 women’s team at the FIBA Under 20 Women’s European Championship Division B in Israel this afternoon as Israel ran out comfortable winners on a score line of 79 to 50.

Battling intense heat as well as a home crowd, Ireland struggled to deal the physicality of the more experienced Israeli team. Ireland started brightly with a three pointer from Aisling McCann but Israel were able to respond with long distance shots of their own and quickly ran out to a 16-5 lead. The Irish cause wasn’t helped by top scoring guard Anna Kelly getting into early foul trouble which limited her involvement.

Despite some nice shooting from Laura Fortune, Ireland were struggling to score from the field throughout the first half. Aisling McCann did show great leadership and the Irish team persisted through some very strong defense to get chances at the free throw line. The story of the half was the turnovers from Ireland that gave Israel a platform to score fast break points. At the end of the first half the score was 41-18.

The second half started on a much brighter note with Anna Kelly leading the way. Anna started with a steal and fast break layup and followed it up with two great scores including a long range three pointer that led to the Israeli coach calling for a timeout and the score was back to 45-27. Momentum swung back away from the Irish team moments later when Anna picked up her fourth foul and she had to take a seat again on the Irish bench. Israel took full advantage and by the end of the quarter Ireland were trailing 60-33.

Despite the deficit going into the fourth quarter the team showed amazing resolve and continued to challenge the Israeli team. Back to back three point shots from Anna Kelly and Ciara Wheler worried their opponents temporarily. Ultimately it wasn't to be for the girls in green as the home team pushed out the lead and the game ended 79-50.

Speaking afterwards, Head Coach Maeve Coleman reflected: “We were disappointed again with our slow start today. It took us too long to get into the game and we were careless with the ball at times which was very frustrating. The big thing we want to see moving forward is consistency. We know that the girls can play at a high level but we need to do it for longer periods.”

“Tomorrow will be another big challenge. Belarus have three players who play on their Senior Women’s team. We know we will have to take care of the ball much better tomorrow to be able to compete, but we know we have the ability in the team to do so”.