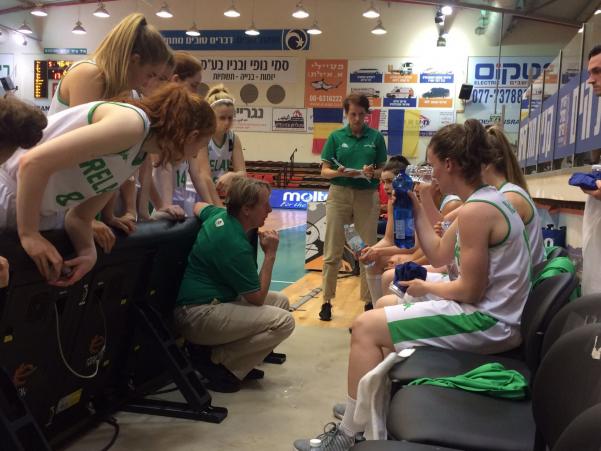 A very big and talented Croatian team today showed why they are a candidate for promotion at the FIBA Under 20 European Championships.

Ireland started the game very brightly with Anna Brennan starting brilliantly with a layup and an assist in the opening minutes. Both teams were trading baskets early and the score was even during the first five minutes. Things soon began to change as Croatia’s size inside started to cause Ireland problems. A couple of missed chances around the basket for the Irish and the Croatians made them pay by going on a huge 17-4 run to finish the first quarter up 30-14.

The second quarter started as the first ended with Croatia extending their lead to 45-19. Ireland showed great fighting spirit to continue battling and they were rewarded with their best spell of the game. 17 year old Alison Blaney stepped up and hit a big 3 pointer that sparked a 9-0 run and got Ireland back to 45-28. Things were relatively equal for the rest of the quarter and at halftime Croatia led 52-34.

The 2nd half had moments of excellence from Ireland with Mae Creane hitting some nice outside shots and Anna Kelly continuing her stellar play so far in this tournament. Kelly managed to record a remarkable double double with 11 rebounds to go with her 12 points. Alison Blaney also stepped up again and managed to score 8 points despite playing 3 years out of her age group. Unfortunately Ireland couldn’t match the scoring power that Croatia had from all over the court and Croatia ended up worthy 83-49 winners.

Speaking afterwards, Head Coach Maeve Coleman reflected: “I thought we left a couple of opportunities behind early that allowed them to open up a lead. We were much better when we moved to zone defence and our bench came in but ultimately they were an excellent team. Their size inside caused us issues and they had some great shooters all over the court. We’ll just have to learn from this and take it into our next game tomorrow”.