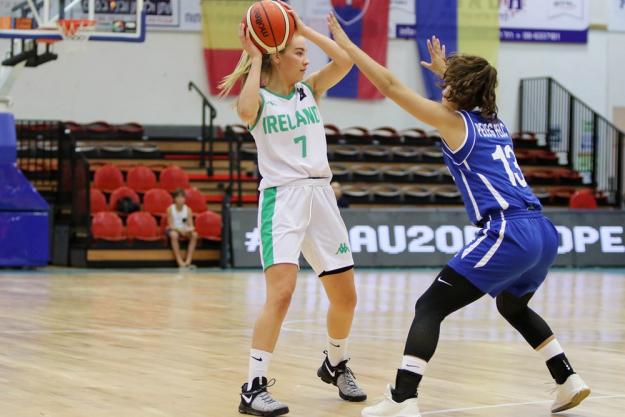 Ireland finished the group stages of the U20 Women’s European Championships with a hard fought loss against Romania.

Romania were the favourites coming into the game having pushed some of the group’s heavyweights close in their earlier matches. Ireland paid no notice to that by bursting out of the gates with some fantastic offense. Anna Kelly had four of the first eleven as Ireland raced into an 11-3 lead causing Romania to take a timeout. Even after the timeout Ireland continued to push ahead with the best offensive quarter of the tournament so far. At the end of the first Ireland led 22-15.

The second quarter started brightly for Ireland and the lead was quickly built out to 28-20 but then things started to go awry. Some calls that clearly frustrated the vocal Irish crowd meant that Ireland were in team fouls with over six minutes left in the second quarter. The whistles seemed to put a halt to Ireland’s momentum and Romania clawed their way back in to the game taking a 31-30 lead into halftime.

After a brilliant first half Ireland started the second half brightly eventually taking a 38-36 lead on a Ciara Wheeler basket but that would be Ireland’s last lead of the game. Romania started to look more comfortable offensively and the five games in six days looked to be catching up on Ireland. The girls were still creating great looks at the basket but many of them were coming up just short. At the end of the third it was 53-42.

It could easily have been expected for the girls to drop their heads as they got tired and Romania built up a double digit lead but there is too much fight and pride in this group to allow that to happen. When seventeen year old Alison Blaney stepped up and hit back to back three pointers to get Ireland within five it looked like we were in for a tight finish. Romania called a timeout and responded with two crucial baskets to open the lead back up and Ireland never got as close again, eventually losing out 69-61.

Speaking afterwards, Head Coach Maeve Coleman reflected: “I thought we continued to improve in so many of the key areas we were focusing on but we just couldn’t knock down enough shots. Our composure was great especially at the start and we played some great team basketball".

"I can’t fault the girls at all, they are doing everything we are asking of them, we just need to be able to score a few more points each game. We have a rest day tomorrow and we will be ready for Ukraine on Saturday in the classification game”.