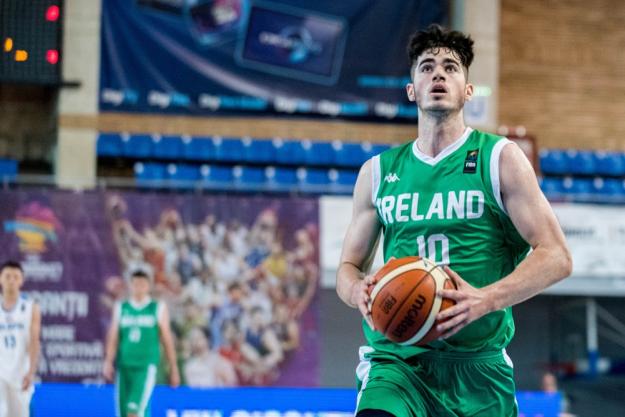 Ireland have slipped to fifth in Group D of Division B at the FIBA U20 Men’s European Championships after a 76-69 to Kosovo in Oradea, Romania. The two nations were evenly matched throughout, but the Kosovans summoned the big plays when they needed them to hold out for the win.

“A tough game to lose,” said Head Coach Dave Baker. “I felt just the small things mattered in the end – turnovers, shot selection and some of their stuff caught us out a bunch of times even though we’d worked on it in practice.”

The head-to-head suggested Ireland would have an advantage in shooting accuracy. It was Kosovo who made more of their opportunities in the first quarter and it took a three-pointer from Robert O'Sullivan to nudge the Irish into a 12-10 lead.

Aidan Dunne and Matt Treacy were backing up their stats as some of the most effective players in the tournament, but Ireland were outdone in the paint and struggled to compete with Kosovo’s reach. 6’8 centre Mergim Jakupi dominated under both rims and a 7-0 run left Baker’s boys chasing a nine-point deficit in the second quarter.

Ireland's bench contributions and fast break points were key elements of their performances to date and both played a role in a spirited comeback. The fast-break wasn’t quite firing but Eoin Rockall outpaced two players for a difficult layup as well as contributing four assists to the first half. Substitute Daniel Heaney made it a one-possession game from the free throw line before a buzzer-beating triple gave Kosovo a 38-33 lead at the break.

Tariq Guebaili’s influence on the game was growing as Ireland upped the intensity early in the third quarter. Ryan Leonard looked to be winning his battle with an ongoing wrist injury and was instrumental in regaining Ireland’s lead. A smooth three-pointer was followed by a defensive rebound, strong drive and euro-step into the paint. From there, the Kerry starlet dished late to Eoin Rockall for three and a 46-45 lead. Kosovo rallied well and again beat the buzzer to end the quarter 59-50 in the clear.

A scrappy restart helped Kosovo to defend their lead before Ryan Leonard’s three-point-play left six points between the sides with 06:45 left. Valon Bunjaku stepped up with two baskets without reply to force an Irish time out with 2:49 left. When Ireland were forced into a shot-clock violation on the next possession, the result looked assured.

“We’ll regroup and go again,” said Baker of his disappointed squad. Robert Sullivan said “We’re a tight knit family and the motivation is there,” while Marcus Black insists “We can play tougher and get another win. All we have to do is tighten up on some of the weaknesses we showed today,” he said.