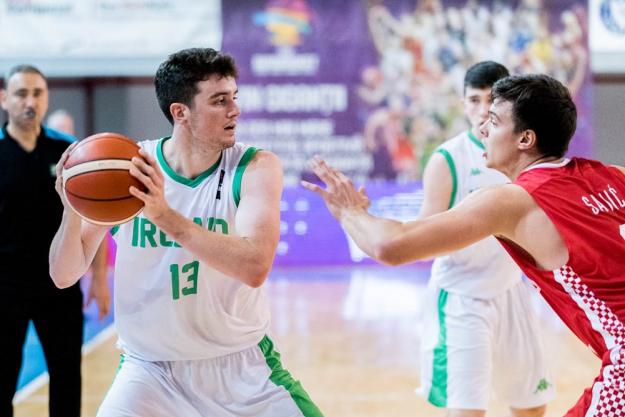 The group stages of the U20 Men’s Europeans ended in disappointment for Ireland as they lost out to Hungary on a score line of 58-46.

Ireland started out the brighter of the two teams inspired some fantastic play from Sean Gilmore. Gilmore who was top scorer against Croatia continued his excellent play with nine points in the first quarter as Ireland led 17-13 after one. Coach Dave Baker went in to the quarter break happy, particularly as Ireland's defense forced Hungary into eleven consecutive missed field goals.

The second quarter saw Matt Treacy come into the game more with some athletic finishes. Ireland were playing well but some sloppiness meant the halftime lead was only two points despite  good Irish play overall. The team shot only 45% from the free throw line in the first and had 14 turnovers both of which hurt their cause.

As the 2nd half started Ryan Leonard started to come to life for Ireland. Leonard the Young Superleague Player of the Year has been hampered by a wrist injury picked up in the first game, but today he was able to score more easily. At the end of three quarters Hungary had taken a slim lead of just three points (43-40).

The fourth quarter is where Ireland’s challenge fell apart. Hungary were able to keep Ireland within the half court and they just weren’t able to knock down shots despite getting some very good looks at the basket. It was only with 3.22 left in the fourth that Ireland scored their first basket of the quarter. As Hungary extended their lead Ireland looked to find a way back into the game but long range shots came up short and Hungary closed out the game winning 58-46.

Speaking afterwards, Coach Dave Baker reflected: “We kept with it for three good quarters and we were right there but in the 4th quarter we just lacked some composure. It was probably just a lack of experience at this level, we just couldn’t execute in the fourth and that’s what it comes down to at international level. We’ll regroup again and keep going in the classification stages”.

Matt Treacy added “It was a tough loss as we hung with them until mid-way through the fourth quarter. It was probably our best game defensively, we stuck together as a team and improved our rebounding which we struggled with in the last few games. Shots just weren’t dropping for us and a tough offensive fourth quarter let us down. We’ll just have to regroup and go again”.