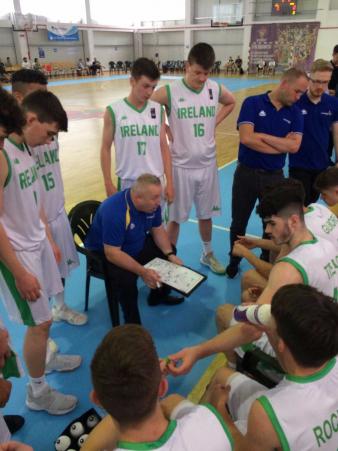 Ireland got their U20 European Championship campaign back on track with a comprehensive victory over Malta, in Romania today.

The early morning start after a two day break looked to be bothering Ireland early in the first as Malta got out to an 8-2 lead. Mid way through the first quarter the game changed for Ireland when Coach Dave Baker brought in a second five. The second unit helped open the game up with a big 9-2 run that gave Ireland a 22-14 lead after one.

At the start of the second quarter Malta started to get to grips with the Irish defense and they slowly clawed their way back into the game at 24-23. With 7 minutes left in the half Baker again went for a five on five off substitution and brought his starters back into the game. Eoin Rockall and Matt Treacy immediately got to work while Ryan Leonard’s impact on the game continued to increase. A 19-7 run for Ireland gave the boys in green a 43-30 lead at the half. Eoin Rockall led the way with 12 while Tariq Guebaili added 8.

The third quarter was the closest of the game so far but Ireland managed to edge it to extend their lead to 66-49. Tariq was scoring well on the break and there were contributions from throughout the team.

The final quarter of the competition for Ireland saw them continue their fast paced hustling defense and fast break opportunities were taken whenever possible. All but one of the players ended up on the scoresheet in a well rounded team effort that saw the team cruise to a 91-61 win.

Coach Dave Baker shared his thoughts on the game: “I was happy with the team performance from all the guys. We didn’t shoot well from the outside but we had good momentum and we passed the ball well as a team. 2nd half we really did well pushing up our press and we got going from there and it really upset their players. We’ll regroup now and get ready again for tomorrow.”