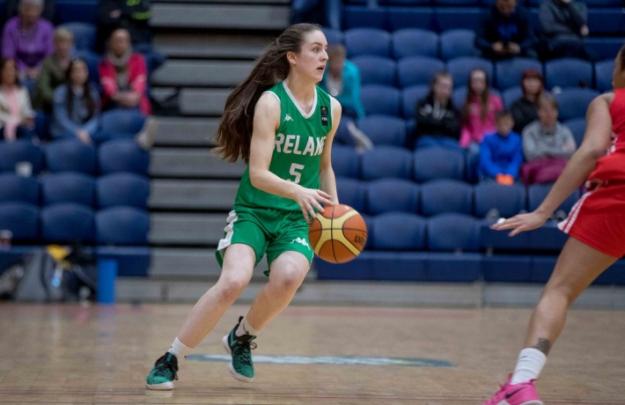 The Ireland Under 18 Women’s team are in Lithuania this week as part of their final preparations for the FIBA Under 18 Women’s European Championship Division B which kick off in Dublin next Friday, August 4th, and will run until August 13th.

The squad played a two-game international friendly series against the A Division home side.

Ireland's Under 18's took to the floor for their final warm up game before their European Championship campaign starts in Dublin next week. The faced off against the home side, Lithuania, who were motivated by the loss at the hands of the visitors in last night's high-scoring affair.

The game started with the expected energy and intensity shown in the previous game. However, this time it manifested itself on the defensive end of the court with both teams finding it hard to break the other down and take a first quarter advantage. Ireland just edged it on the scoreboard at the first buzzer, 11-14.
The second quarter saw the home side assert themselves with some active play in Ireland's passing lanes and some aggressive offensive rebounding. Still it was hard to separate them on the scoreboard, and neither team broke away, going into half time with Lithuania holding a narrow lead, 30-28.
In an exact reverse of the previous tie, it was the home side who came out of the blocks stronger in the third quarter. Before Ireland had a chance to settle, they found themselves nine points down and struggling to find their rhythm. In true Irish fashion however, they stuck to their process and found a way to be successful, getting to the basket, drawing fouls and establishing an interior presence, which created space for their sharp shooting guards. Had the game shown them a little more favour they might have been in a better position, but as it stood, the third quarter came to a close with a score line of 44 to 39 in favour of Lithuania.

In order for the Irish to come out on the right side of the scoring, they needed to produce a run in the fourth to close the gap and build a lead of their own. Unfortunately, despite taking a brief one-point lead in the quarter, the home side seemed to have an offensive response for each push the visitors made. It led to some exciting possessions, some great back and forth basketball, and the highest scoring quarter of the tie, but unfortunately, faded from the grasp of the under 18 squad. The game finished Ireland 56, Lithuania 62.

Ireland will come away from their final warm up games with some valuable lessons, and confidence high, as they take to the courts in Dublin next week in this summer's European Championships.

"I'm really happy with our two-game series," said Coach O'Mahony. "Tonight was a tough loss. They found it hard to get a rhythm in the first, but I was delighted as we battled really hard to stay in touch.

"Down the stretch, we just couldn't get our shots to drop. Overall, it was a great test for us that sets up nicely for the Euros. We arranged a tough training schedule and it has pushed us to the next level - we just need to stay there now. As a group, the Euros can't come quick enough for us now."

The Ireland Under 18 Women secured a massive win over hosts, Lithuania, in the opening game of the two-match friendly series on Thursday evening. Tommy O'Mahony's charges started the game off with a bang, running hard at the home side to open up a narrow 25-21 point gap at the end of the first quarter.

The home side looked to steady the ship in the 2nd, taking the pace out of the game and seeing what the visitors could produce. Ireland shared the ball well and were able to adjust but the tactic seemed to work with Lithuania taking a lead at the half 37-36..
Coach O'Mahony must have said the right things at the break because Ireland  came out with a lot of energy to start the second half and opened a gap of 6 points on a run that shocked the opposition. The game never reproduced the energy of the first quarter but some pressing by both sides throughout the second half saw both teams generate runs with  passing master class.
The home side didn't lie down and managed to close the gap and briefly take the lead midway through the fourth quarter. The visitors responded and showed their potential at the highest level of European basketball, hitting 100% from the free throw line in the fourth quarter. The game finished a high scoring 74-69 to the Irish. The second game of the double header should serve up an equally exciting contest.

Speaking afterwards, Coach O'Mahony stated: "We are delighted with the result. We really went out hard in the first and got our runners open. We never really got with the tempo of the second quarter, but we opened the second half with some great energy that put us on a 10-0 run. A lot of our players stood up and took responsibility today, which saw the game out in the end. It was great to get the win, but we need to knuckle down again for tomorrow and show that we belong at this level."