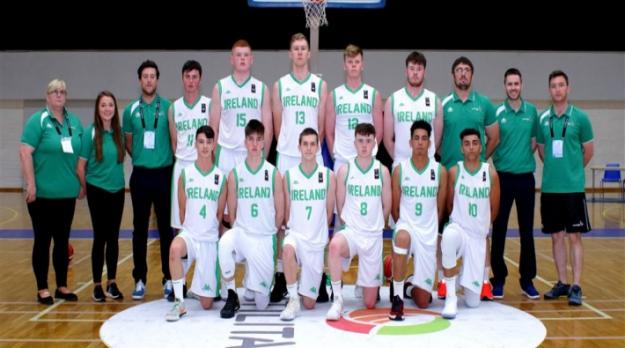 The Ireland Under 18 men's team were once more left regretting a slow start to their game this afternoon, as they lost out to Switzerland by 72-56 in the second round of group games at the FIBA Under 18 Men’s European Championship Division B in Estonia.

Indeed, the Swiss dished up a scoring masterclass on court today, with Selim Fofana and Laurent Zoccoletti bagging 40 points between them and punishing Ireland at every opportunity for a sleepy opening quarter - outscoring the boys in green by 24 points to 6 early on.

In what was similar to their opening round performance against Belgium on Friday evening, Ireland took almost a quarter and a half to find their rhythm in this afternoon’s game, with Cian Heaphy a notable loss at the top of the key: the Cork man having been ruled out of the remainder of the Championships earlier today due to injury.

Sligo’s Oisin O’Reilly was on top form, bagging the majority of Ireland’s points up to the half-time buzzer, where Ireland headed to the dressing room trailing by 38-19. A solid third quarter, followed by a superb fourth quarter from the Irish (where they outscored the opposition by 24-19) was just too little too late for the team though as, despite Donal Ring, O’Reilly and Sean Jenkins all impressing on the long range shots, time just ran away from them and Switzerland finished comfortable winners in the end.

Speaking afterwards, Head Coach, Conor James, stated: “We’re very disappointed with the result this afternoon, as I really think the lads could have matched Switzerland much better. Once again, we were caught out in the first quarter and from then on, we were chasing the game. We played much better basketball in the other three quarters and it’s just a pity that the first quarter didn’t live up to what these lads are capable of doing. They seemed to be missing a bit of self-belief early on, but they proved what they can do as the game went on – particularly in the fourth quarter. Now it’s just a matter of addressing that early lapse and some smaller mistakes elsewhere and hopefully get things to click in tomorrow’s game."

Keep up to date with all the action from the FIBA U18 Men’s European Championships in Estonia by visiting the official event website here.