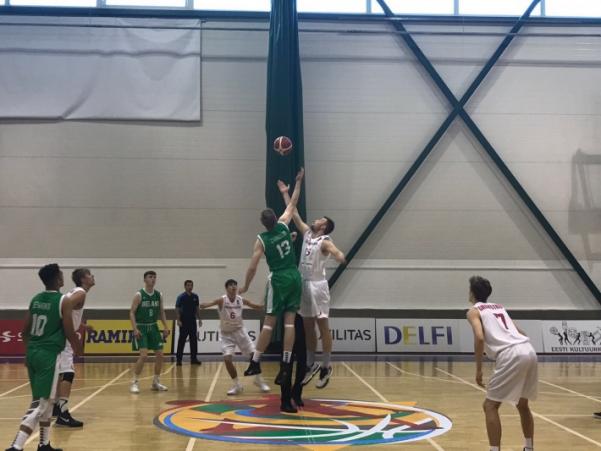 Ireland Under 18 men’s team played out their final group game of the FIBA Under 18 European Championship Division B in Estonia this evening, and were outclassed by an on-form Danish team.

A strong first quarter from Ireland saw them take an early 16-8 point lead by the end of the first quarter, with Sean Jenkins and Oisin O’Reilly dominating the scoring to put the boys in green in a strong position going into the second.

However, it soon became clear that Denmark had only been finding their feet in the first, as they began an assault on Ireland’s boards, racking up a huge 32-point second quarter, with Sampson, Bjarkason and Bulow all dominating at both ends of the court to take a 40-29 point lead into the dressing room at half time.

A somewhat shell-shocked Ireland regrouped well during the break, with Jenkins, O’Reilly and Patrick Lanipekun all finding the basket, but Denmark had hit their stride, and there was a 20-point margin between the sides going into the last, 65-45. A strong fourth quarter display from Ireland saw some strong defense and good offensive moves, with Lanipekun getting the crowd on their feet with a big dunk in the closing stages, but it was Denmark’s day as they ran out 84-63 point winners in the end.

Head Coach Conor James said: “Our offence keeps improving, but we are struggling to contain the guards off the dribble. This means we’re over-helping and teams at this level are very good at readying and reacting to find open players. The next three games are all very winnable, and we hope to have learned from this round of group games to finish the tournament on a positive note.”

Ireland will play Austria in their first classification game on Friday, August 4th.