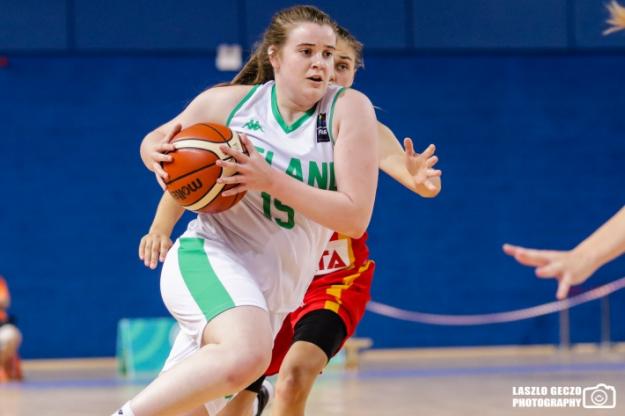 A fantastic team effort capped off an easy win for the Irish U18 Women as they blew past Moldova 116-25 this evening at the NIA in Blanchardstown.
Seven players scored in double digits and almost every player received equal game time in what was truly an all round impressive display.

The girls in green got off to a flying start as Sorcha Tiernan scored within the first few seconds after tip-off. Ireland went on to utilise their superior passing ability to take advantage of Moldova’s lacklustre defence and gain scores. In an attempt to create a fast pace, Moldova fired multiple wayward passes up the court, to no avail. As great as Ireland played on offence, they matched that intensity on defence, especially Annaliese Murphy who nabbed 7 steals, as Ireland lead 29-7 at the end of the first.

Ireland continued where they left off in the second quarter, with exquisite passing and elite concentration on defence. Maggie Byrne was extremely effective coming off the bench, as was Amy Murphy who was dominant under the boards along with Ella McCloskey and Maeve O’Séaghdha. More scores from Dayna Finn and Byrne, ensured Ireland’s convincing 58-15 lead at halftime.

In Quarter 3, Bronagh Power Cassidy joined Finn and Byrne in scoring double digits, while Louise Scannell brought the intensity back into the Irish team, with clinical fast breaks and well-timed shots. There was rapturous applause in the National Indoor Arena when Annaliese Murphy sank a three-pointer, meaning everyone on the Irish squad had registered a score. The Moldovans tried their hardest to fight back, but the might of the Irish was too strong as they only scored a single point in Q3, giving Ireland a 94-16 lead.

Quarter 4 saw exactly what the three previous did - clinical Irish passing while capitalising on many Moldovan mistakes and they drove home to glory in what was basically a warm-up game to Tuesday’s crucial matchup v Great Britain.