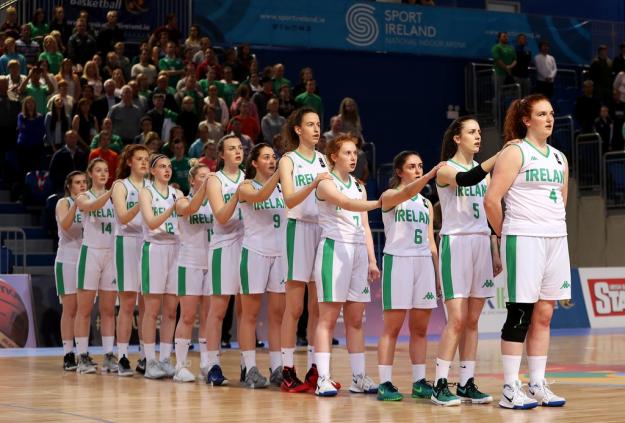 **Update: There will be a very limited box office at the Arena.**

A limited number of tickets are available ON THE DOOR at the National Basketball Arena. These will be sold on a first come first served basis, and once they have been sold, the doors will be closed so we advise all fans to arrive early.

Ireland will take on Great Britain at the Arena at 6.15pm in a top of the table clash in Group D.

Both teams are currently undefeated in the FIBA U18 Women’s European Championship Division B which is being hosted in Dublin at the NBA and the National Indoor Arena in Abbotstown. With three wins from three games under their belts and only two games left in Group D until the final group placings are decided, this game is set to be a thriller as a win for either side guarantees a top eight finish in the prestigious tournament.

Ireland come into the game off the back of two commanding wins over FYR Macedonia and Moldova, and a super upset against Slovak Republic over the weekend. Backed by huge Irish crowds, the team has been playing brilliant basketball over the course of the last few days. Their defense and transition play has been one of the big talking points for supporters, while they have an average winning margin of 58 points. Double-doubles from key players such as Claire Melia and Rachel Huijsdens have had the crowds on their feet and tonight’s clash is set to be another packed event as fans are due to flock to the Arena for what is set to be one of the big games of the tournament.

Speaking ahead of the game, Coach Tommy O’Mahony said: “We’re looking forward to the Great Britain game now, it should be a cracker. It’ll be a top of the table clash so it’s set to be great.  The girls have played three games in a row, so they had a bit of a rest on Monday, but we will refocus and look ahead to GB now and get our fast break going again. There’s a small few things we need to work on, but overall, we’re really happy with the performances.”

Great Britain will not be an easy opponent by any stretch of the imagination, as they too come into the game with wins over Moldova, FYR Macedonia and Ukraine. Outside shooting has been the hallmark of the GB team so far,  with point guard Charlotet Elmore leading from the front, bagging an average of 16.5 points per match while the squad overall averages 11 three-pointers per game. Another player to watch for the visitors will be playmaker and top scoring Holly Winterburn who has been central to the GB attack also.

Ireland will go on to play Ukraine in their final group game on Wednesday, August 9th, in what is set to be yet another tough test for the squad. Ukraine won out over FYR Macedonia in their second game of the weekend, but suffered defeat at the hands of Great Britain and Slovak Republic in their other two games. There’s no doubt that a big result against Ukraine on Wednesday will also tee Ireland up nicely going ahead to classifcation.