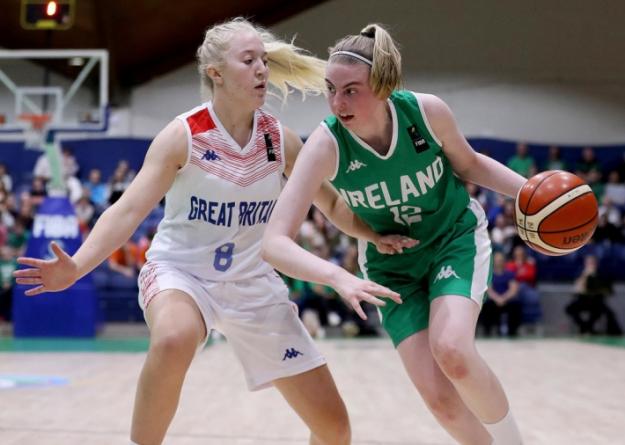 Ireland’s U18 Women qualified for the quarter-finals of the FIBA European Championships with a game to spare after a 63-49 win over Great Britain at a sold-out National Basketball Arena in Dublin. Tommy O’Mahony’s side will top Group D regardless of Wednesday’s result against Ukraine with the classification stage of the competition starting on Friday.

“The big thing is we have to make sure we play well going into the quarter-finals,” said Ireland’s Head Coach. “The tempo and the attitude will have to be right and we’ll have to work on some things which didn’t click for us against GB.”

Ireland’s interplay and ferocious workrate gave them a clear edge throughout and they channeled the Arena atmosphere into defensive intensity - forcing 19 turnovers in the first half. Dayna Finn opened the scoring and Rachel Huijsdens kick started her double-double to help Ireland lead 19-6 after 10 minutes.

Great Britain came into the game unbeaten as the top scoring side in the tournament. Charlotte Ellmore was their sharp-shooter in chief, but was kept scoreless from open play in the first half as the visitors struggled to find open shooters at the perimeter. They peaked early in the second quarter when the hard-working pair of Maria Lozzi and Charlotte Ellmore combined for a 5-0 run to reduce the margin to seven points.

Ireland’s 24 first-half points in the paint were a direct result of a vision and penetration that carved open Great Britain at will. Bronagh Power Cassidy led the early scoring and her third steal typified Ireland’s attitude -  the lead was 37-23 at half time.

Claire Melia continued her role as fans’ favourite, notching her third double-double in four games. She pulled the strings with six clean assists and three steals while her third-quarter block gave Sorcha Tiernan the chance to pick out Louise Scannell for three-points.

Ireland’s bench helped to put them 25 points clear with 15 minutes to play. With 8 games to play in 10 days, attention turned to conserving energy in the final period.

“Having such a strong group of girls has really kept our stamina going and the rest day will be good too,” said Bronagh Power Cassidy. “I don’t think I’ve ever played in front of a crowd like this. To hear the roar and see all the green in the crowd is something really special.”