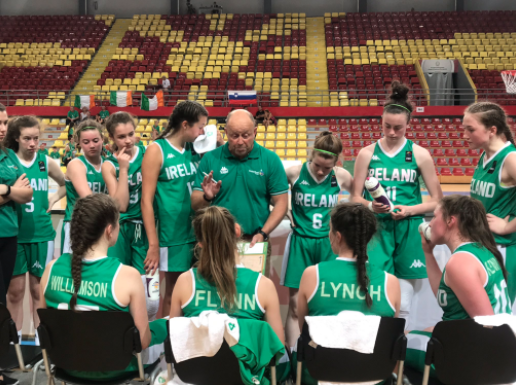 There was disappointment for the Ireland U16 women’s team as they got their European Championships campaign underway this evening and lost out 50-70 to Slovenia in a tough and competitive late game in Skopje.

A superb performance from Katie Williamson and Abby Flynn saw Ireland keep neck-in-neck with a focused Slovenian side early on, and despite a nervy opening quarter from the Irish, early scores from Mia Furlong, Niamh Kenny and Flynn saw just three separating the sides at the end of the first, 20-17 in favour of Slovenia.

Ireland continued to find their feet in the second and Slovenia drove hard at the basket, going on a strong run of 10 points as the quarter got underway. Scores from Ciara Bracken, Katie Walshe and Williamson kept Ireland’s scoring ticking over, but the Slovenians had the upper hand at the break, 38-28.

A huge third quarter performance from Williamson saw her getting three vital blocks early on to curb the tide of the Slovenian’s momentum, and she followed this up with superb rebounds and a great finish to the basket. Kenny and Flynn continued to battle hard for Ireland and Lainey Nolan also made a big impression, but Slovenia still held control at the end of the third.

Slovenia really found their feet in the fourth though and despite super defence across the board from the Irish team, shots just weren’t dropping for them at the other end and it finished 50-70 in favour of Slovenia.

Ireland will play Moldova in their second pool game on Friday.