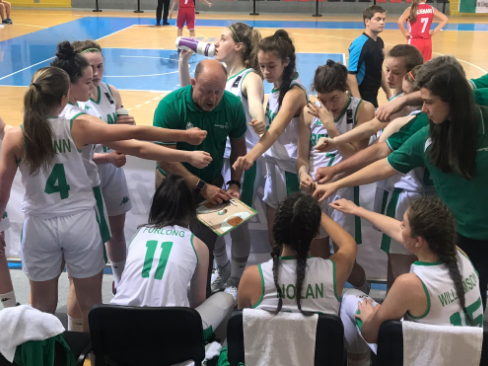 The Ireland U16 women’s team drove home to a comprehensive victory over Moldova in Skopje this evening, winning out 89-15 point winners in the end.

Ireland now progress into Day 3 at the FIBA U16 Women’s European Championship Division B with one win and one loss, but will come up against a tough test in the form of one of the tournament favourites, Belgium tomorrow afternoon (Saturday).

Andy Gill’s charges made no mistake in putting their stamp on today’s game early on, driving into a 23-6 point lead by the end of the first with superb performances all round. The Irish team’s defence was the talk of the quarter – and indeed, the game – as Niamh Kenny, Alex Mulligan, Ciara Bracken and Lauren Bracken led the charge with super steals and rebounds.

Abby Flynn was on point at the top of the key, while Katie Williamson, Mia Furlong, Anna Lynch and Erin Maguire all made huge impressions throughout. As the second quarter got underway the full time result was already determined as Bracken was superb on the break, while Ciara White, Lainey Nolan and Katie Walshe stood firm on defence to keep any possible threat of a Moldovan offence at bay. Indeed, they kept the opposition to just one point in the second quarter to head to the dressing room with a 47-7 point cushion.

A huge third quarter from the Irish, which saw Niamh Kenny and Bracken dazzle on defence, saw them keep the pressure on Moldova throughout, with Alex Mulligan making some crucial steals and Nolan firing on all cylinders at both ends of the court to run out 68-9 points ahead at the end of the third and they continued to set the pace in the fourth to run out 89-15 winners in the end.