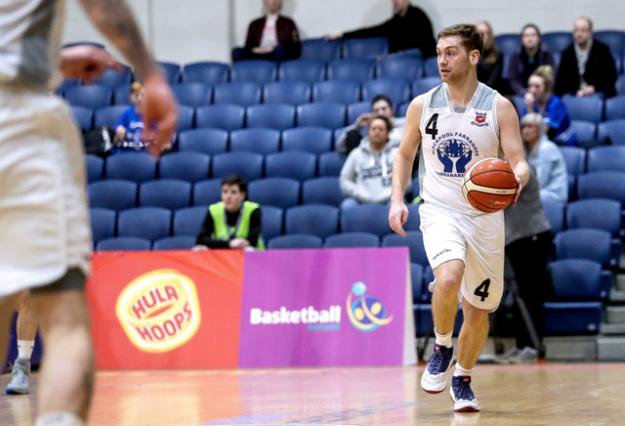 There were thrills, spills and upsets galore at the weekend as the opening round of the Hula Hoops National Cup got underway, dishing up some spectacular results across the board.

One result in particular caught the attention of basketball fans nationwide, as underdogs DCU Saints caused the upset of the weekend when they overcame reigning Cup champions Griffith College Swords Thunder in thrilling fashion, 75-70.

“It was a sweet win to get,” admitted DCU Saints head coach, Joey Boylan. “It feels very good to get the win, especially in the Cup. It was always going to be a tough game, being up against Swords and especially in their place, but we never let them get a run on us.”

Indeed, Swords, who had lost just one game so far this season, were left on the back foot from early on as Joey Boylan’s charges drove into a 38-42 point half time lead, with Men’s Super League September Player of the Month, Dee Proby, proving to be a massive thorn in the side of the Swords defence, top scoring with 30 points. Despite the best efforts of Thunder stalwarts, Charlie Coombes, Isaac Westbrooks and Justin Goldsborough, DCU Saints kept their cool and ran out 75-70 point winners in the end to knock a shell-shocked Swords out of this year’s competition.

Elsewhere, Black Amber Templeogue held firm to run out 90-81 point winners over Belfast Star, with a phenomenal display from Lorcan Murphy, which saw him net 30 points for the Dubliners. Neil Randolph, Jason Killeen and Lawrence Summers put in determined displays across the board and managed to keep a Conor Quinn and Keelan Cairns inspired attack at bay as the clock ticked down.

UCC Demons also marched through the opening round unscathed, as they overcame KUBS with ease in Greendale, 47-101.

Moycullen and Maree played out a thriller in the Jes in Galway on Sunday meanwhile, as the big local derby saw Maree tie the game midway through the fourth on 69 points apiece. A huge three from Paddy Lyons coupled with some other well-timed scores saw Moycullen keep their cool though, and managed to hold on firm in the dying stages to win out 79-71 in the end.

In the Men's Super League meanwhile, UCD Marian's unbeaten run came to an end when they fell to a 66-91 point win to Pyrobel Killester at UCD.

In the Women’s Super League, Courtyard Liffey Celtics and Singleton SuperValu Brunell dished up one of the games of the weekend, with just a point separating the sides at the final buzzer, and the Kildare team relieved to take the win.

“It was a great win. We didn’t get off to the best start – it took us at least two quarters to figure out their strengths,” said Celtics head coach, Mark Byrne. “Once we did that, we played great defence in the second half. They’re a really tough team, smart and well-coached, so any win against them, you’ve got to be happy with.”

Elsewhere, Pyrobel Killester bagged their first win of the season when they overcame Portlaoise Panthers at home on Saturday evening, while NUIG Mystics had to settle for second best in a close tie with Ambassador UCC Glanmire. Mark Ingle’s charges at DCU Mercy meanwhile made it two from two with a solid win over IT Carlow Basketball on Sunday afternoon.

There was also Cup action in the Men’s Division One league, with the battle for the President’s Cup producing some big results. Cup holders Neptune got out of jail just in time against IT Carlow, managing to hold their nerve in the dying seconds to edge into the second round.

Elsewhere, Paris Texas Kilkenny shocked Ulster University Elks with a big win at home, while Cup runners-up from last season, Ej Sligo All Stars bowed out at the hands of Portlaoise Panthers.

It was a nail-biter in Donegal meanwhile as an unbeaten Keane's SuperValu Killorglin managed to pip LYIT Donegal to the win by just two points, while Fr Mathews' Marcus Thomas top-scored with 40 points against LIT Celtics to see them safely through to the next round of the Cup on a final scoreline of 99-70.

There were some big results in the Women's Division One meanwhile, with Griffith College Swords Thunder securing a massive win on the road on Sunday afternoon, running out 72-78 point winners over Ulster University Elks. A superb performance from Swords' Peggy Black helped drive the team on to glory after a closely contested affair at UUJ.

Elsewhere, Marble City Hawks pipped Meteors at the death, 55-53, as a drive from Katie Fox with four seconds on the clock found its desired target much to the relief of the home crowd. Meanwhile, Fabplus North West had to settle for second best against the well-oiled machine of Fr Mathews, who ran out 52-74 point winners in the end.