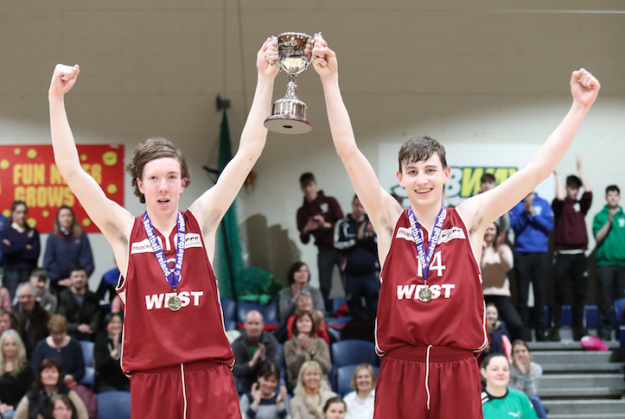 Under 19 B Boys All Ireland Schools League Final

St Paul’s Oughterard have one more piece of silverware to add to their collection as they overcame Colaiste Ide agus Iosef Abbeyfeale 63-51 at the National Basketball Arena in Tallaght today to be crowned the Under 19 B Boys All Ireland Schools League champions.

This is the second All-Ireland title for the Galway school, having previously won out the Subway Schools U19 B Boys Cup final back in January. An MVP performance from St Paul's star player and Irish international, Paul Kelly, was the talk of the Arena, as he chipped in with a whopping 35 points today to drive his team home to glory. He may have been the leading actor on the day, but Kelly had a huge supporting cast around him with superb performances from Alan Kelly, Ryan Monaghan, Cian Monaghan, Dan Kenny and Matthew Tierney as well.

Both teams made a very slow start to the game and, although there was good defence on display, there were a lot of unnecessary turnovers and missed chances. The first score of the game came from Moycullen super star Paul Kelly as he found the target from the free throw line, but Abbeyfeale’s Dan Kenny responded at the other end. As the nerves settled for both teams, St. Pauls' zone defence proved to be a thorn in the side for Abbeyfeale as they finished the quarter trailing by four, 14-10.

Paul Kelly was on hand once more to get the scoring underway in the second, teaming up nicely with Cathal Walsh and Cian Monaghan on rebounds and defence. St. Paul's had built up a seven-point lead with five minutes to the half, however Muirioch McNulty was in impressive form for Abbeyfeale, and used his speed and agility to his advantage.  A McNulty rebound and a Dj Stack fast break saw the gap close to within five points, but St Paul's weren’t finished yet, as with some big threes from Kelly and Tadhg Callanan, they finished the half ahead by 32-23.

The third quarter saw a more determined and driven display from Abbeyfeale and they mounted more pressure on St Paul's. Fighting a nine point deficit, bright sparks Adam Maynard and Mark McCarthy made life difficult for St Paul's as they spurred another run to close the gap to just two points. Nevertheless, with their experience gained from of their Cup final win in January, St Paul's were able to keep their cool and respond with scores of their own.

MVP Paul Kelly was only delighted to showcase the depth of his shooting abilities to the fans, with three pointer after three pointer, while Cian Monaghan and Matthew Tierney were also on hand to add their names to the score sheet.

St Paul’s Oughterard's class and experience shone through in the end, to win out 63-51.

Presentation Secondary School, Tralee have added another triumph to their year as they were crowned champions of the U16 B Girls School League finals after a comfortable 47-14 point win over St Paul’s Oughterard.

Indeed the Kerry team are no strangers to the National Basketball Arena, having already featured there earlier this year when they were crowned Subway U16 B Girls All Ireland Schools Cup champions.

There was little to separate the teams in the opening exchanges, as both sides battled hard on defence keeping scores at a premium. It was St Pauls’ Anna Fahey that opened up the scoring with a lay-up, which was responded by a superb shot from Lisa Curran for Tralee and a nice basket from Aisling O’Connell to help them off the mark, and they went on to lead 8-2 at the end of the first.

The second quarter continued in the same vein, with Mary and Aisling O’Connell dominating the boards for Tralee, while MVP Rachel Killgallen came into her own for the Kerry team. It wasn’t all one-way traffic though, with good scoring at the other end for St Paul’s, and Roisin Curran working tirelessly on defence.

The third quarter though was where Tralee really stamped their authority on the game though, with Killgallen, Maryanne Flemming and Aisling O’Connell dominating the scoring. St Pauls’s Roisin Curran could not be faulted for passion as she fought tooth and nail to keep her side within reach, but a fast and pacey offense from Tralee was just too much for them, and they powered into a 30-11 point lead at the third quarter buzzer.

Mid Q4 in the U16 B Girls #SchoolsLeagueFinals and it's Pres Tralee 37 St Pauls 11 https://t.co/NQNxttWY6e pic.twitter.com/PbcfmxTo18

Tralee kept the tempo at a high pace in the fourth quarter as, despite Meabh Walsh’s best defensive efforts for Oughterard, it was Killgallen who continued to be a handful for St Paul’s and the mountain was just too big to climb for them and Presentation Tralee were crowned champions on a final scoreline of 47-14.

A heated and tense battle was played out at the Arena, and though Colmcille’s won out well in the end, St Brendan’s definitely didn’t make life easy for them.

Colmcille’s started off the brightest, with good scoring from Tom Phelan and Evan Cullen sending them into an early 15-4 point lead. St Brendan’s began to settle in the second though, with Eoin McDonnell and Evan Ivers getting in some good scores, but Colmcille’s were firmly in control by the half, 30-12.

A heated third quarter followed as frustration ran high on both sides. Again, Colmcilles worked hard under the boards, with Tom Phelan putting in a huge effort at both ends and despite the best efforts of St Brendan’s, Colmcilles continued to dominate going into the last. A much closer fourth quarter added an extra level of excitement for the large crowd, but the mountain was just too much to climb for Belmullet, and they lost out 48-35 in the end.