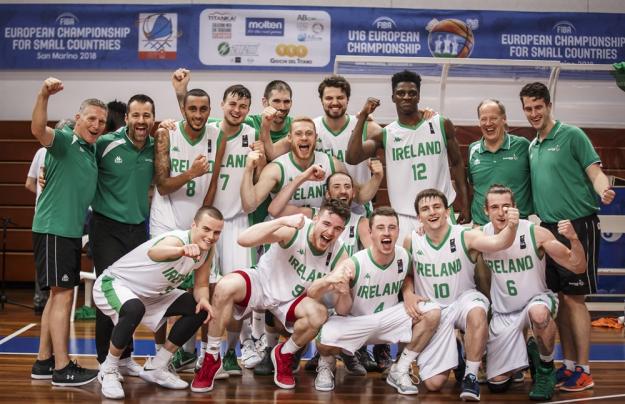 There were huge celebrations in San Marino this afternoon as the Ireland senior men’s team stormed home to a podium finish with an 86-66 point victory over Gibraltar in the FIBA European Championship for Small Countries.

The bronze medal clash saw a superb performance from the Irish, with Taiwo Badmus putting in an exceptional performance with 19 points, including two spectacular slam dunks to lead the Irish to victory.

Indeed, Badmus was then named on the tournament All Star five team - much to the delight of the Irish support.

Ireland got off to a rapid start, with Badmus and Travis Black getting some big scores on the board, and Keelan Cairns and Ciaran Roe adding two big three-pointers to take an early 19-12 lead at the end of the quarter.

Pete Strickland’s men hit cruise control in the second quarter, with key scores from Badmus, Jordan Blount and Adrian O’Sullivan building the lead further, to have a 46-25 point cushion at the half.

Gibraltar made every effort to claw back the lead in the second half, with their star man Miguel Ortega Amusco on form from behind the three-point line, but the Irish were not going to be knocked off the podium and cruised home to a 20-point win in the end, following another dunk from Badmus and scores from Black and O’Sullivan.