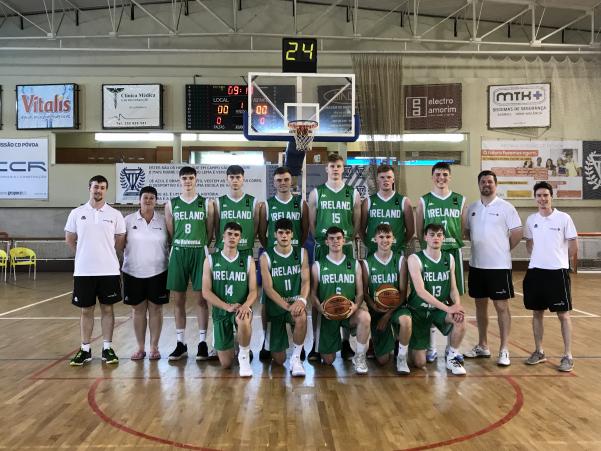 The Under 18 men's team were in Portugal at the weekend for a two-game international friendly series, in preparation for the upcoming FIBA European Championships Division C which take place in Kosovo later in the month.

It was a tough second game for the Ireland U18 men on Saturday evening, as they lost out to a tall and strong Dutch team in the second of their two-game international friendly series in Portugal.

The Dutch side – who won out the friendly tournament – laid down a marker from very early on in the game, keeping Ireland off the scoring for the opening exchanges, with Norbert Thelissen and Morgan Stilma dominating the scoring - the former finishing the first quarter with 11 points. A huge opening quarter from Ireland’s Eoin McCann helped to put some vital points on the board for the Irish, but by the end of the first, the Netherlands had opened a 33-10 point lead.

Ireland executed some nice moves in the second quarter, with good play from Darragh O’Sullivan and David Murray, but the Dutch continued to dominate, using their height to their advantage, and stormed in at half time 57-26 points ahead.

A much better second half performance from the boys in green followed, with Oisin Rice and Conor Liston two of the stand out performers for the Irish down the stretch. O’Sullivan continued to impress with some big scores, while good work on defense from James Connaire, Cillian O’Driscoll and Matthew Harper began to see Ireland pull off some well-worked scores. Nice link up play from Nate Moore helped the Irish to penetrate the tall Dutch defence, but they were still notching up some big scores at the other end, with Stilma and Thelissen proving to be the ones to watch, and they headed into the last quarter with an 88-45 point cushion.

Again, there are a lot of positives to take from the closing quarter’s performance by the Irish. Solid contributions from Eoin Nelson and Jay Kavanagh helped to open the floor for the Irish, while Rice, Liston and O’Sullivan continued to impress, adding more scores to their tallies. The Dutch upped the tempo yet another level though, and big scores from Rienk Mast and Nick Thran helped them up over the century mark, to win out 112-52 in the end.

Ireland Under 18 men went head-to-head with a tough and physical Portugal side on Friday evening in the opening game of their two-game international friendly series in Portugal.

The boys in green were up against it from the off, as a tall and strong Portugal side hit the ground running, opening up a 14-0 lead early on as Ireland struggled to get up to the pace of the game. A quick regroup on a time out, and team captain Darragh O’Sullivan got Ireland off the mark with a superb long score and it was officially game on. Scores from the in-form Cillian O’Driscoll, David Murray and a good finish from Conor Liston followed and the Irish trailed by just three points (18-15) going in at the end of the first.

O’Sullivan again with a huge three it’s Portugal 34 Ireland U18 23 with 3.55 to go Q2 #greenshoots. Watch it here https://t.co/wJ29dBH3nF pic.twitter.com/0HHNCpYdfR

Portugal came back hard into the second quarter, with Hugo Ferreira finding his range from outside the three-point line, and Francisco Amarante causing big problems for the Irish defence. A full court press from the hosts put the Irish under severe pressure, and some costly turnovers proved rewarding for the home side as they began to put some space on the scoreboard once more. A big three from O’Sullivan brought Ireland back within nine points as the clock ticked under the six-minute mark, but the pressure continued and Portugal edged further ahead. Scores from Murray, Eoin McCann and Liston kept the Irish scoreboard ticking over, while O’Driscoll continued to impress, dunking his way home to finish off a great fast break move from the Irish.

Despite good work from Nate Moore and Jay Kavanagh on defense though, the Portuguese had found their rhythm, and were leading by 20 points by half time, 51-31.

A much more evenly matched third quarter followed, with great defence from James Connaire setting O’Driscoll up for another good score. Good link up play between McCann, Eoin Nelson and Matthew Harper produced some vital scores for the Irish, while David Murray and Oisin Rice kept the pressure on the pacey Portuguese guards. Matching the hosts almost score for score throughout the period still left the Irish with a mountain to climb going into the last though, as the home side led 75-52.

The fourth quarter was another tough and gruelling battle for the lads in green, and despite their best efforts, they were outmanoeuvred by the sheer physicality of the hosts. Liston and Murray chipped in some well-taken scores, but Ireland had to settle for second best following a tough night, losing out 90-64 in the end.