RECAP: One win & one loss for Ireland U18 men in Austria 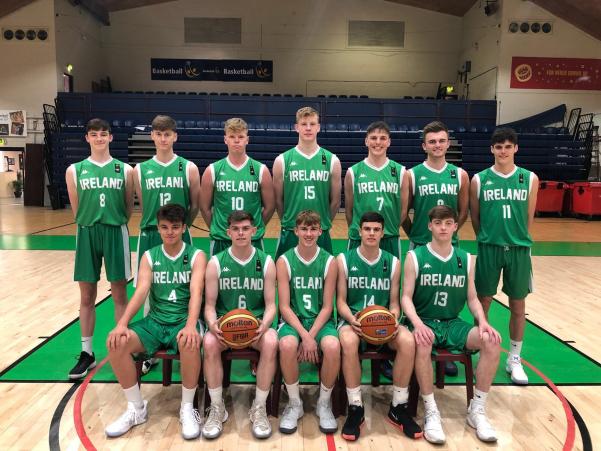 The Ireland Under 18 men's team had a big test in Austria this week as part of their final preparations for the FIBA U18 Men's European Championship Division C, which tip off in Kosovo this Sunday (July 22nd).

The boys in green came out with one win and one loss from the friendly tournament.

You can see all the results and reports below.

For the third game in-a-row, the Ireland Under 18 men's team got off to a slow start as they were forced into two early first quarter time-outs. They finally found their rhythm with scores from Darragh O’Sullivan, David Murray and James Connaire to get them back in the game, but they trailed 21-14 at the end of the first.

A more solid second quarter from the Irish followed, with some good defense from the boys in green, and led to them scoring 13 points before the end of the half to make it 45-32 going in at the break.

Ireland came out full of energy in the third quarter, but missed some good opportunities, which Austria duly punished to increase their lead to 23 points midway through. Ireland responded with a nine-zero run with three minutes remaining, and finished the quarter stronger to bring the gap down to 16 points.

The fourth quarter was Ireland's best performance of recent games, as they showed signs of a young team beginning to understand what they can achieve. Their defensive tenacity and offensive composure was outstanding and only for the Austrian’s size, this game could have been a little different, but the hosts ran out 86-72 point winners in the end.

Speaking after the game, Ireland Under 18 men’s head coach Paul Kelleher stated: ‘In one respect, we are disappointed, but in another, we are happy that we finally found some consistency. Our game starts are a concern, as is our free-throw shooting, against Portugal and Austria these two areas have had huge significance on the outcome of the game. But our end of games have been good throughout. The challenge now tomorrow is to find our start of game consistency."

Ireland came out all guns blazing for their second game against Austria, with high intensity, big energy and much improved efficiency.

Point guard Paul Kelly controlled both ends of the floor, and everyone else followed his lead as they settled into a strong rhythm from early on. Having previously got off to a slow start in earlier games, today's clash was a much-improved start for the team, opening up a 4-8 lead by the midway point of the quarter, which soon stretched out to 7-15. However, Austria regrouped well after a well-timed timeout, and soon drove their way back into the game to see the end of quarter scoreline reduced to just three points, 13-16 in favour of Ireland.

Ireland upped the ante in the second quarter, but Austria hit a purple patch in the early minutes, and took the lead for the first time in the game when they scored to make it 27-24.  An Irish timeout followed, and that settled the squad once more, and they drove on to retake the lead just before half time, to go to the dressing room 33-36 to the good.

Just like the opening quarter, Ireland started brightly in the third, controlling the pace of the game with some superb defensive rebounding and some nice play in transition to lead 45-57 going into the last.

In the fourth quarter, Austria responded well to close the gap to 59-68, but Ireland kept their cool and continued to impress to run out 62-73 point winners in the end.

Speaking afterwards, Ireland U18 men's head coach Paul Kelleher said: “We really focused on our start today during practice this morning. We were very specific on four details and it helped hugely. Everyone played a part today and hopefully that can continue going forward - that’s what these prep games are about: developing an understanding of working outside one’s comfort zone and being efficient in that zone.

"Wins are great, but the process is what we have focused on against these high-level teams to get us ready for the promotion hunt. Today was a very satisfying and morale boosting win and I feel we have just had our breakthrough moment. Another tough game awaits tomorrow against Macedonia before we start against Malta on Sunday.”