Ireland Under 18 men qualify for the FIBA 3x3 Europe Cup 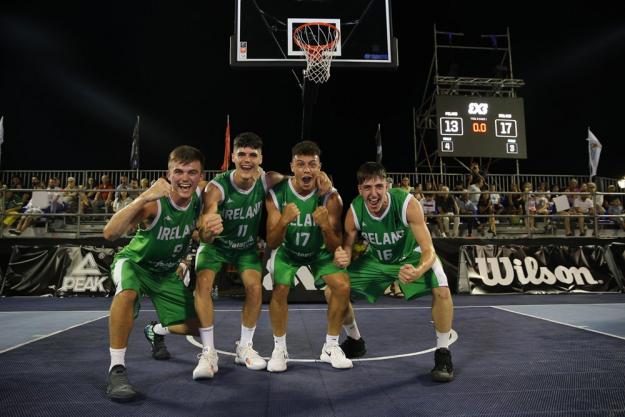 The Ireland Under 18 men’s 3x3 team wrote their own piece of history this evening in Bari, Italy as they become the first Irish men’s 3x3 team, and first Irish underage team to qualify for the FIBA 3x3 Europe Cup in Hungary at the end of this month.

The success follows on from last year’s Senior Women’s 3x3 team's journey to the FIBA 3x3 Europe Cup, and it is hoped that the boys in green will be able to keep momentum going later this month on the big stage.

It was a rollercoaster of a day for the team, as they got back to winning ways early this morning with wins over Switzerland and Andorra. They had to wait until late this evening though to find out their fate, and they were left with a late all-or-nothing clash with Poland for a coveted place at the FIBA Europe Cup.

The Ireland U18 Men’s 3x3 team become the first Irish men’s and first Irish underage team to qualify for the #3x3u18 Europe Cup WHAT A DAY!!! #GreenShoots @FIBA3x3 pic.twitter.com/jcB1yffVFd

A phenomenal team performance from Ireland saw them take an early lead over the Polish and an early dunk from Cian Heaphy made it clear that the Irish meant business. James Beckom - who has been a stand out player of the tournament for the Irish despite carrying an injury - put in a MVP performance, while Murray and O’Sullivan dug deep on defence to win out 17-13 in the end and book themselves a spot in Hungary.

Speaking afterwards, a delighted head coach Paul Kelleher stated, “This is an incredible achievement and one that has been driven by Basketball Ireland’s Matt Hall. He is the catalyst behind the growth of 3x3.

“These boys have had a long learning curve since last year and this and they deserve it. It finally clicked against Andorra, all of the small details, and they carried that into the game against Poland. The boys were incredible and their desire to achieve was extremely evident in their performance. They now get to perform at the Europe Cup against more big nations.”