RECAP: Disappointment for Ireland as they fall to Denmark 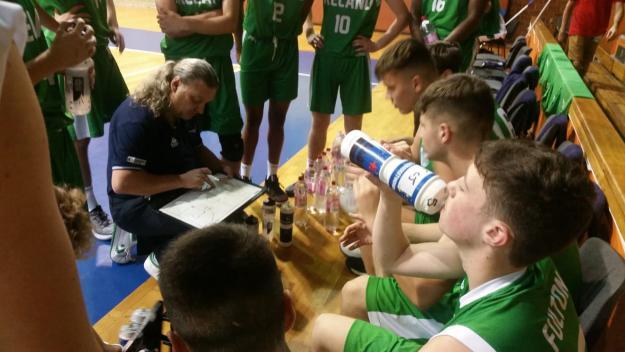 There was disappointment for the Ireland Under 16 men when a third quarter comeback proved ultimately insufficient, as Denmark narrowly won out on a scoreline of 63-64 in the 9th to 16th place classification stages.

It was a slow start for Ireland as Denmark built up an early lead getting the first scores of the game. Rapolas Buivydas replied with scores of his own, while a steal and layup by CJ Fulton saw Ireland trail Denmark 8-12 midway through the quarter.  Denmark found their rhythm adding points to the scoreboard with two quick steals followed by easy scores, while Buivydas was denied a score as he was blocked down by Denmark’s Linus Gron. Ireland were under pressure and found themselves behind 15-22 at the end of the quarter.

The next ten minutes followed in the same fashion as Denmark matched Ireland score for score. Denmark’s slick shooting stretched their lead out to twelve-points midway through the quarter forcing head coach Mike Lynch to call an Irish timeout. Ireland continued to work hard for the final few minutes, with reward coming through a huge three-pointer from Kelvin O'Donoghue.  Despite their best efforts, the boys in green found themselves trailing at the half 29-37.

Ireland kept their best work for the second half as they launched a major comeback. A huge three-pointer from Fulton helped eat away at the Danish lead, while the defensive work of Eli Lenihan, Ronan Collins and O'Donoghue kept Denmark’s scoring to the minimum. A defensive rebound by O'Donoghue led to an easy Lenihan basket as Ireland got to within three points. This great play was followed by a drive to the basket by Buivydas that made it a one-point game with five minutes left in the quarter. Ireland’s tight defence forced Denmark to take long range shots, the majority of which weren’t falling. The great defense was matched offensively by two scores from Collins and Buivydas as Ireland took a four point lead heading into the final quarter.

Fulton goes to the line to tie it all up at 45 apiece for the U16 men against Denmark with 2:46 to go in Q3 #FIBAU16Europe #COYBIG #GreenShoots @IrishRail WATCH: https://t.co/CL2WwWteoI
BOXSCORE: https://t.co/g3CX9JkzDp pic.twitter.com/4YqdrjXyUv

The start of the final quarter was cagey as both teams traded baskets and it was clear there was going to be very little separating the two sides. Both team’s stepped up their defensive efforts again and scoring opportunities were hard to come by on both ends. Great work between Fulton and Collins saw Ireland maintain their lead, however a few misplaced passes and missed shots gave Denmark the chance to turn the game around. As the time ticked away Denmark only got stronger taking back control of the game and the lead. A late three pointer from Ireland added some drama but ultimately it proved too late for the boys in green.  A combined 31 points from Fulton and Buivydas coupled with superb defence across the board will leave coach Mike Lynch please but unfortunately the effort wasn’t enough as Ireland lost out narrowly 63-64 to Denmark.

Head coach Mike Lynch reflected on the game: “At European level you need to be a threat inside and outside the paint. We weren't consistent enough in our offensive execution and when you work as hard as we do on defence you have to capitalise on this.

“One should not question the effort the players are putting in, they are giving it their all. We had our chances and the lads are going to have to bounce back and learn from this. This is no time for hanging heads we need to believe in ourselves more and stick to what has brought this team to where it is.”