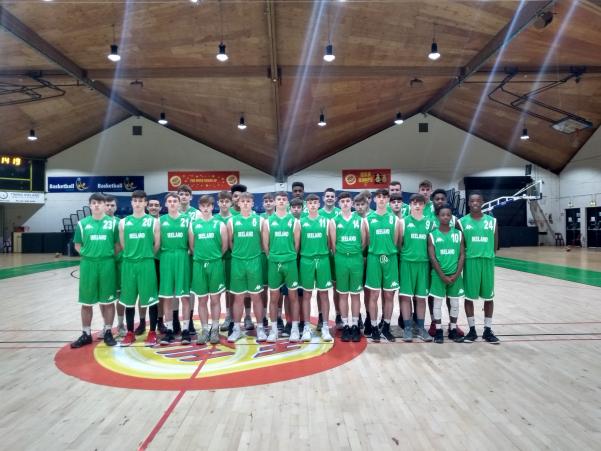 The Ireland Under 17 men's team will be in action this weekend at an international friendly tournament in France.

Coach, Paul Langan, has divided the squads as below, while their fixtures for the weekend are also listed in Irish time below.

A spirited opening game of the tournament for the Ireland Green team against a select team of the top players in the East of France.
Ireland started strong, with Matthew Sweeney, Luke Gilleran and Luke O'Sullivan all scoring well in the first quarter. The team pressed hard and got turnovers, staying with the team, finishing down two, 30-32 at half time following a buzzer-beating three-pointers from Sean O'Flynn. Some unforced errors, and easy points left at the rim found the Irish down by 21 points by the end of the third. Ireland pushed through tough breaks and made good inroads to the French team's lead to the final whistle, with Ben Kelly, Colm O'Reilly and Darragh Timmons fighting hard. It finished Ireland Green 55 - 70 Grand Est France.
Up next is one of the two Serbian teams in the group, Belgrade FMP, whilst Ireland White have a chance to even the score as their next game is against Grand Est France.

Team Ireland Green played their second match in the KidsGameBasket tournament in France this afternoon against a well organised Belgrade FMP.
The Irish started well putting the first 5 points on the scoreboard. Belgrade weren't long levelling up, and the teams were neck and neck for the entire first half. Luke Gilleran made important three pointers, Darragh Timmons and Colm O'Reilly working hard under the boards. Josh Meehan, Tommy Houlihan and Jake Verschoyle worked their legs to exhaustion to stay with the strong point guards of the opposition.
A well structured pick and roll game, complimented by a lot of off ball screens saw the Serbs take what seemed like an inevitable win with a ten point lead in the middle of the third. The Irish had other plans.
Some crucial plays from Ben Kelly, Binyam Keegan and Matthew Sweeney took the deficit to just 5 going into the 4th. The Irish held their nerve, remaining composed against an aggressive full court press from Belgrade. With only 2 minutes to go in the game, Ireland Green took the lead, and had to work hard to keep it. Ben Kelly, outstanding in defence and offence steered the Irish to a fantastic 3 point win!
The game finished Ireland Green 60 - 56!
Up next for Team Green are Zitko Belgrade, who had a three-point win against Ireland White this morning. 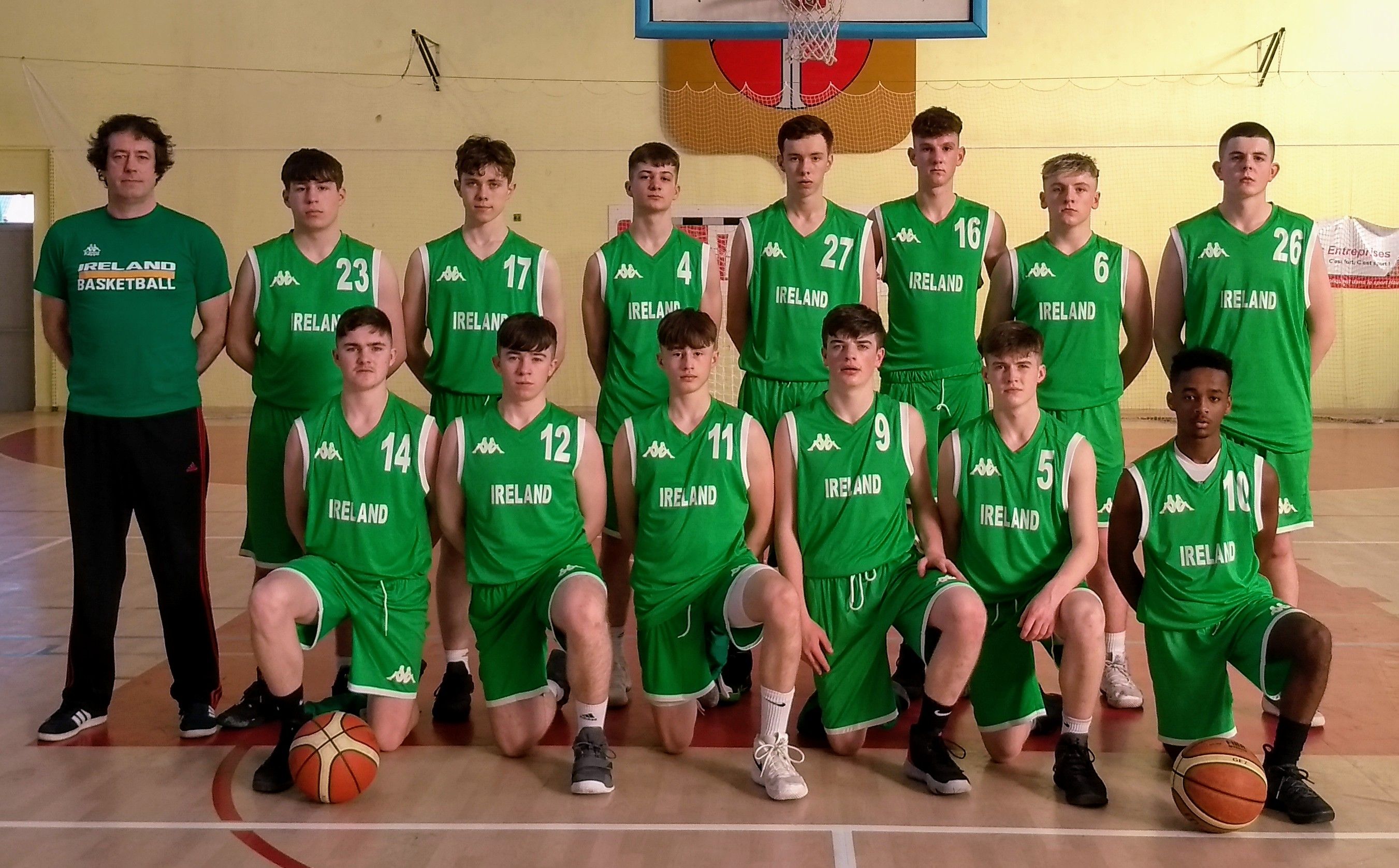 Ireland Green 59 - 62 Lokomotiv Kuban
In Ireland's fourth group game of the tournament, they faced yet another well structured team. Tall inside men, complimented by strong guards and outside shooters, Ireland had to be on their toes in defense throughout. The game started well, with Ireland making good use of Matthew Sweeney's strong armed ball distribution feeding the fast breaking guards down the court for easy transition baskets. The game was deadlocked throughout, with neither team being able to establish dominance. Ireland suffered a knock back early in the third quarter with big man, Colm O'Reilly being sent to the bench with 5 fouls. Ireland regrouped in Alex Devitt and Luke Gilleran controlling the paint on both sides of the floor. The game could have been won by either team, but in the end a cool three pointer from Kuban's shooting guard gave them the breathing room to see out the game.

Zitko Belgrade 78 - 70 Ireland White
Ireland’s campaign began in Reixheim just outside Mulhouse, France , which saw a fantastic match unfold. For a first time competitive game together, the Irish team nearly caused a massive upset against a fantasied Belgrade team.
Jamie Muldowney put all ideas out of Belgrade heads that this was going to be a walk in the park by opening the game with Ireland’s first five points, mixed with Conor Walsh's five three pointers displayed throughout the game. Belgrade's coach looked frustrated, and amazed, that Ireland where causing him such problems.  Elijah Faapito gave a marvellous display as point guard, running at speed at the Belgrade defence, and spreading the play to a hard working and relentless Irish team, hungry to cause an upset.
Troy Ajimokun and Brian O'Hara Duggan impressed, adding to Ireland's scoreline, but Belgrade showed composure under extreme pressure to see out the game.

Grand EST France 67 - 43 Ireland White
Ireland White moved to Kingersheim for game two in their campaign, looking to grab a win against one of Europe’s top clubs. The developmental Irish squad ran into a French squad, who gave a lesson in controlling a game which Ireland could not get to grips with.  The pace and tempo demonstrated by the French team was fantastic to watch.  They were clinical at every opportunity that presented itself, contrary to Ireland, who’s strong work ethic was not rewarded with the ball hitting the rim, rather than whistling through the net as it did in the first game. Conor Walsh started with two early three pointers looking to continue his great form from game one. However the well dried up for Ireland as the three pointers failed to fall. That did not stop Ireland’s determination, as Brian O'Hara Duggan, Tommy Coogan and Daniel Ayaode were lively, and worked hard to trouble the French side. Jamie Muldowney and Troy Ajimokun were made work hard by the French under the basket and fought vigorously for rebounds. Both were creative in offence also but the Irish endeavour as a whole lacked execution.
The rotation of the bench by the Fu Faapito gave great experience to all Irish players.  It was only Irelands second game together which proved to help a well organised experienced French team comfortably see out the game.

Locomotive Kuban 69 - 56 Ireland White
After two difficult games Ireland White looked for that elusive win against a big Lokomotiv team.  For long spells Ireland looked brighter on the ball and displayed a strong work ethic.  With a strong defensive attitude Ireland held the tall Russian’s at bay. This work gave them the lead late into the second quarter with scores coming from a spread of players with Elijah Faapito Troy Ajimokun Jamie Muldowney Pauric Moran Daniel Ayaode Tommy Coogan all contributing to the Irish tally.  However the relentless effort given by the Irish team throughout the day showed and a fresh looking Russian team took control in the third quarter leaving Ireland 12 points down going into the final quarter.  A mixture of hard work and endeavour was not good enough as the the Russian team killed Ireland’s Challenge with display of three pointer scoring to break the hearts of the Irish players and the large travelling supporters who cheered on their all day.  The experience of the day was valuable to these young up and coming Irish players who represented their country with pride.  On speaking with management from the teams they played today Ireland surprised a lot of coaches with their fantastic work rate and never say die attitude.

Ireland White 73- 66 Belgrade FMP
The atmosphere in Kingersheim Arena overlooked by Alps In the southeast of France reminded me of the Jack Charlton days. There were tears of joy as the Irish team secured an amazing victory.
When Ireland's top shooter, Conor Walsh, announced he was unable to play, due to a knock in the last game someone had to step up. Welcome Alex Devitt and Paraic Moran to the stage. An explosive session of three pointers from both players set the stage for a tremendous Irish performance. Point guard Elijah Faapito's display of pure skill and guile was a platform for a top quality Irish display. The Irish supporters were the extra man encouraging their team all the way as Ireland lead 24-18 after the first quarter.  Ireland looked in control of the game. Belgrade needed to respond and they did just that and bounced right back into the game with some classy baskets.
Ireland once again needed to find an answer with the game delicately balanced, Belgrade starting to take control.  Step up Tommy Coogan, who lifted the Irish team and vocal Irish supporters with a three pointer of pure class.  From that point on Belgrade knew they had a problem. This Irish team were not going away. In fact, they were ready to rock the arena.
From that point on, every Irish player stood tall hassling and harrying on every occasion.  The crowd broke into ole ole, and didn’t stop until that nail biting moment when the referee final blew that whistle.  Troy Ajimokun and Jamie Muldowney said no to the Serbian offence in the end, and both added to the team score.  Daniel Ayaode and Brian O'Hara Duggan also contributed to the score sheet, but it was the unity and togetherness which won the contest against a classy Serbian team.
This result had high significance for the Irish U17 Panel, as one of the two teams will now play each other in the final group stage game, with the winners going through to the 3rd / 4th place final tomorrow, a remarkable achievement for the Irish management.