Ireland U16 Women to play tournament in England 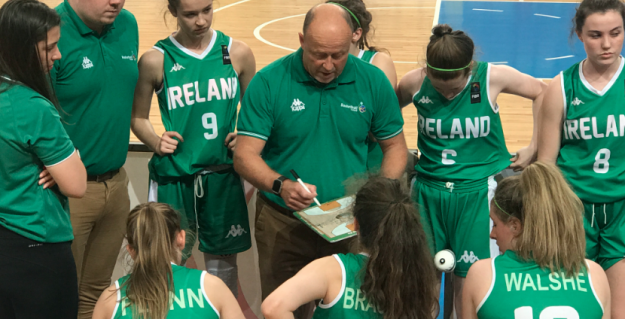 The Ireland Under 16 women’s team will play a warm-up tournament in Nottingham, England this coming weekend as part of their ongoing preparations for the FIBA U16 Women’s European Championship Division B this summer.

The squad will contest games from April 18-21st, and looking ahead to the weekend, head coach Andy Gill said: “Having five games over a four-day period will be an excellent test of our resilience and a marker of where we are as a squad of players. It will be an opportunity for everybody to gain extensive game time and for them to demonstrate the core concepts of the programme. The next team selection to 12 players will take place shortly afterwards, so motivation will be high and, as always, we expect competitive games from our British counterparts.”

Ireland travelled to Sheffield to play a Sheffield Hatters select team on Saturday 20th April. All available players were placed on the scoresheet with everyone contributing to the scoring. Coach Gill took the opportunity to view proceedings from the side-line and allow assistants Lynch and Donnelly to take the reins. Ireland continued to implement their press and which allowed them to lead 16-8 at the end of the first quarter. The lead was extended to 33-19 as the half-time whistle blew in a rather low key encounter that lacked the intensity of the 3 earlier games. Ireland really struggled to score in the third quarter but were able to maintain good defensive pressure allowing the opposition only 8 points. As the fourth quarter reached its midpoint Ireland finally exerted their running game running out winners 68-47.
Coach Gill stated ‘We were nowhere near our best today but using 14 players and constantly substituting meant that we played with a lack of rhythm and efficiency. We certainly allowed too many points, especially in the last quarter, where our transition defence was suspect. We are hoping that the Wales game tomorrow will really allow us to demonstrate what we can do’

GB had split their squad playing their strongest 12 in this game and it was a salutary lesson in the requirements of international basketball for this squad of players. GB were big, long and athletic and came out in a half-court extended 1-3-1 zone. The first quarter was a struggle at both ends of the floor with Ireland being comprehensively beaten inside by GB. Coach Gill reverted to a 2-3 zone due to their inability to handle basket cuts and keep GB’s tall forwards off the offensive glass. Finn, Kelly and Ryan were able to have some joy in penetration but Ireland finished the quarter 14-20.

As is always the way in basketball one quarter always makes the difference and this was the case in this game. GB continued to dominate inside and also added some fast break points which was very disappointing. Moore and McCarthy added to Irelands points but scores were hard to come by and Ireland finished the half 43-27 down.

The second half proved to be far more effective for Ireland. Hynes and O’Doherty added a defensive spark and Salvado was able to find some success inside. At the end of the quarter Ireland had lost it by a point bit still trailed 45-62.

As the fourth quarter progressed Ireland continued to keep scoreboard parity but looked like they were heading for a comprehensive defeat. Ugwah and Mulvey were batting hard on the boards and Keane and Diggins scored their first points of the game. A time out called by coach Gill to urge for a ‘last throw of the dice’ had a positive effect on the squad and full court pressure reduced the deficit to 9 points with 4 minutes to go. However, another missed defensive assignment allowed GB to shoot a 3 off a screen and Ireland were not able to get any closer.

Coach Gill reacted to the disappointing result. ‘In conversation with a respected GB coach after the game she stated that this GB squad had the potential to do well and I would concur. It will be a tough battle later in the year at the European championships. We executed poorly on offence and showed defensive frailty against basket cuts and on-ball screens. That was disappointing in consideration of the work we had done recently. We also compounded the problem by missing lay-ups and giving up transition baskets. Not our best day at the office. However, our second half performance was much improved and we had a chance to take it to a six point game but we were punished on a pick and roll scenario that should never have happened. We maintained our great spirit so will look to learn the lessons and move onto the next game v a Sheffield Hatter select team.

Ireland women faced a very different test in their next game against a GB U16W select. The first quarter saw the Irish 4 points down 16-20. GB had a size advantage and level of athletic ability that the Irish struggled with in the early stages. Mulvey, Finn, McClean and Ryan had all made points contributions and it was game on as the second quarter began.

This quarter saw Ireland impose their running game to greater effect and also utilise full court defensive pressure to create a number of steals and easy lay-ups. Mulvey continued her good work inside ably supported by further good shooting from McClean. At half-time Ireland had overturned the 4 point deficit with a 26-8 half which was a testament to the relentless they imposed. Ireland now led 44-28.

The third quarter proved to be a very close fought affair in the early stages with Ireland struggling somewhat to contain GB inside the key and keep their tall forwards off the glass. McCarthy, O’Doherty and Salvado kept the scoreboard ticking over. Ireland were able to maintain parity on the scoreboard and now led 60-43

It was in the fourth quarter that Ireland shown the determination to pull away. Hickey opened the scoring from the free-throw line and Finn continued to drive relentlessly to the basket with Ireland maintain defensive pressure. They won the quarter 21-15 to run out winners 81-57.

Coach Gill was pleased with Ireland second game performance. ‘In consideration that for 5 players this was their second successive game at the end of a very long day it was a great effort’. We ran and ran on both ends of the court and never allowed GB to settle. Rest and recovery is now the order of the day in preparation for tomorrow’s third game.

The Ireland Under 16 women team began their Nottingham trip with a resounding victory against England Under 15 women. Coach Gill had asked for an improved full court defensive effort and an emphasis on transition offence. The players responded in a positive fashion jumping out to a 27-11 first quarter lead. Ireland exploited their advantage inside the paint with O’Donnell opening the scoring followed by a drive and lay-up from Finn. Mulvey and Hickey continued to dominate inside and the Irish team began to show their ability to play the full court game that has been the hallmark of recent Irish teams.

The second quarter continued in similar fashion but a lull in intensity allowed England to close the gap to 14 points. However, Ireland responded with two minutes of intense full court pressure resulting in steals and lay-ups for Kelly, Ugwah, Moore and Finn. By the end of the quarter Ireland had pulled ahead 47-24.

The half-time locker room conversation revolved around ensuring players maintained the strategies that had brought them first half success. The message was heard loud and clear with a dominant third quarter. Salvado, Diggins and Hynes all got their name on the scoresheet which meant all 10 players had scored. By the end of the third quarter the lead was now 74-38.

With the 6 AM meet at Dublin airport taking its toll intensity dropped off and Ireland high octane offence stuttered but nevertheless they were able to run out winners 87-53.

Coach Gill was happy with the first game performance and stated ‘This team had faced a baptism of fire in Belarus in December but that really showed them what is required at international level. We had a size and maturity advantage over England and I was pleased that we were able to use that to great effect. We ran hard, hustled and generally played the kind of game that we wanted. Everybody played good minutes and got on the score sheet’