Ireland U18 Men travel to France this weekend 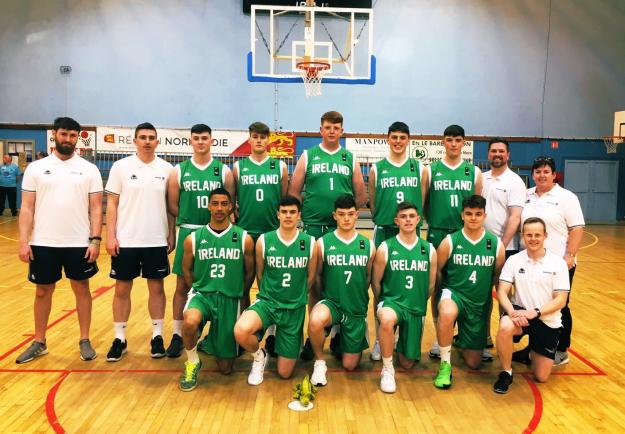 The Ireland U18 men’s team will travel to France this coming weekend to take part in a warm-up tournament as part of their preparations for the FIBA U18 Men’s European Championship Division B this summer.

Looking ahead to the games, head coach Paul Kelleher stated: "This is the first real opportunity for our team to understand what we are like as a unit in a travel setting. They will get the chance to practice their on and off court routines and also learn about themselves and their teammates as people also. We are very much looking forward to seeing where we are as a basketball team."

In tremendously competitive final, where there were 14 lead changes, Ireland came out on top with a battling performance to overcome Reading Rockets  Academy 62-57. Ireland started brightly on both ends of the floor, but while their defence was excellent they struggled to find their scoring touch early. Some tough scores from David Lehane & Daire Kennelly while great defence from the front line by James Connaire allowed Ireland to stay within touching distance. Ireland lead 20-16 at the end of the 1st Quarter.
The second quarter was owned by Matthew Harper. While the defensive zone concepts stifled the Irish, Matthew Harpers 4-for-4 in 3 minutes blew the game open and Ireland took back the lead 36-33 at the half.
The 3rd quarter belonged to Rockets as their size, interior presence really caused the Irish problems. Ireland’s Free-Throw shooting and ability to get to the line was a key in this quarter while Rockets bombarded the Irish glass and found joy from it. Rockets clawed back some points and Ireland lead by a minimal one point 45-44 end of the 3rd quarter.
Rockets continue their physical onslaught, but Ireland went to a small line-up when Rockets took a 55-50 lead. From the time-out, Ireland emerged with Paul Kelly, Nate Moore, Tiernan Howe, David Lehane and Matthew Harper. The small line-up caused confusion for the monstrous Rockets and the defensive grit caused run-out after run-out. Ireland took a 57-55 lead and reintroduced James Connaire for Nate Moore who cleaned up on both boards. Ireland finished on the game on a 12-2 run from 50-55 down to win 62-57 to take the title game.

Ireland’s dominance began from the first whistle. Ireland’s collective and improved efficiency and energy was clear to see from the off despite losing James Connaire right at tip-off will illness. David Lehane’s defensive tenacity on Cherbourg’s sharp shooter international set the tone and the rest followed. Ireland’s defence created their offence and scores from all over the starting created great momentum and Ireland deservedly led 18-7 at the end of the first quarter.
Paul Kelly point guard play to dictate the offence was excellent in the second quarter. Ireland did slow down which was expected and Manchester began to get a grip on the game and clawed their way back into the game narrowing Ireland ‘s lead to 31-34 at the half.
Matthew Harper came alive in the 3 rd quarter with three after three while Andrew O’ Connor’s defence was exceptional creating deflections and loose balls which Ireland brilliantly took advantage of to get run-outs from Tiernan Howe, Matthew Harper and Paul Kelly combined with defence created a 44-32 lead end of the 3rd quarter.
Ireland’s clinical 4th quarter and improved bench performance from Ronan Cregan and Stephen Achukwu in order to rest Paul Kelly and Tiernan Howe a little before the final. Ireland increased their effort, improved again on their defensive rotations and this lead to easier offensive scores. Compared to last night the squad contribution was far superior and Ireland ran out deserved winners 61-37.
Top Scorers
Tiernan Howe – 19 Points
Matthew Harper – 17 Points
Daire Kennelly – 10 Points

Ireland played their third game of the tournament and started without some key players due to knocks picked up earlier. Guadeloupe got the early run with some slack defense forcing Paul Kelleher to call an early timeout.  From the re-start Ireland regained composure with scores on the board from James Connaire and Matt Harper to end the quarter down 12-19.

In the second Ireland had some great drives to the basket from Paul Kelly and outside shots from Matt Harper, they regained control on the scoreboard to go in at the end of the 2nd down just a single basket.

From the re-start of quarter 3, Guadeloupe had the momentum as defense was penetrated too easily.  Foul trouble saw key players sitting down and Ireland finished the quarter down 10, 38-48.

Quarter 4 saw the introduction of Nathan Moore who played his first minutes of the tournament due to injury.  Immediately Nathan made an impact knocking down a 3 and spurring on his team to claw back the Guadeloupe lead.  In the closing seconds, Ireland had the chance to equalize but the solid defense prevented this and the final buzzer sounded.  Final score Ireland; 58-60 Guadeloupe.

The second quarter Manchester edged back into the game to tie the score early. It was very much score for score with James Connaire doing most of the scoring. With 1:54 remaining in the quarter, a time-out from Ireland lead to a 6-0 finish of the second quarter to lead 25-16 at the half.

Ireland came out in the 3rd, executed well but failed to hit any uncontested shots that they worked. Manchester ran the ball back hard at the Irish early in the quarter and a 7-0 run had Ireland on the back foot. Ireland got their first score to make 27-23 but Manchester took the lead 27-29 but a quick time-out from the Irish with a minute to go led by a Paul Kelly surge brought some life to the Irish at the score was tied 30-30 end of the 3rd.

The end of the 3rd quarter surge catapulted the 4th quarter domination. Andrew O’ Conor and James Connaire defended the interior exceptionally well, while score from Matthew Harper, David Lehane and Tiernan Howe energized the Irish to run out winners 50-39.

Ireland got off to a great start in Cherbourg this evening with a win against the hosts.  Defence was excellent with three shot clock violations in a row in the first quarter.  James Connaire started as he meant to continue and knocked down his free throws at will.  Ireland ended the first quarter 23-6.

Cherbourg improved in the second quarter and matched Ireland basket for basket but thanks to big baskets from Tiernan Howe, the team went in at the end of the 2nd Quarter 41-22

The Second half saw some great passages of play and Coach Paul Kelleher was happy with the execution of some of the actions.  Paul Kelly ran at the defence and also caused headaches from outside the three point line.  Ireland finished out the quarter with some good shots from Matt Harper to lead 62-32

The final quarter saw Coach Kelleher use some different rotations and great defence from Ronan Cregan saw him get some fine blocks.   Daire Kennelly finished the game with a deep 2.