ROUND UP: Ireland U18 women in Portugal 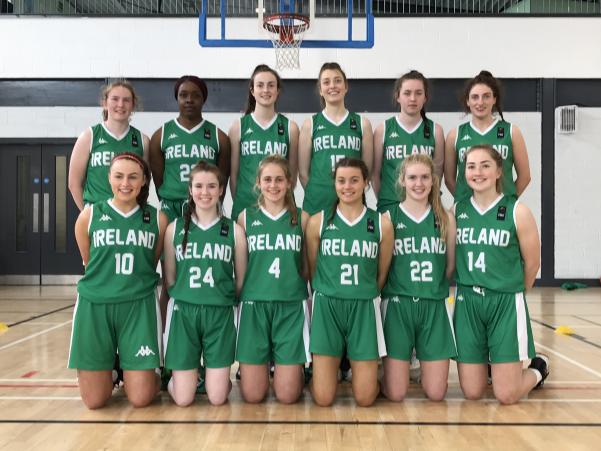 The Ireland U18 women’s team are in action this weekend at the Guifões tournament in Portugal.

They will face off against the hosts in their opening game on Thursday, June 20th before also going head-to-head with Israel on Friday.

Ireland will also play a friendly game against Portugal on June 23rd.

Speaking ahead of the tournament, head coach Tommy O’Mahony stated: “This is our last preparation games before the Euros in July. We have some very tough games against Portugal and Israel and also play some Portuguese professional women’s teams. This week long camp will be ideal preparation for the Euros and gives us a chance to look at areas we need to improve on. Last weekend we had a very competitive game against the Irish U20s and as players and coaching staff, we learned a lot. This trip will help us fine tune our game plan and put the girls in the best possible place for the Euros.”

Ireland finished off their thre-game series against top class international opposition with an 83-54 defeat against Portugal. Ireland welcomed Niamh Kenny back in to the side following Leaving Cert commitments but were again without the services of Siofra O’Shea and Debbie Ogayemi.

Ireland opened the scoring with Alex Mulligan battling through the Portuguese defense to convert. Katie Walshe added another score and when Erin Maguire added two free throws Ireland found themselves 10-8 ahead. The hosts responded with two quick threes to give them the advantage at the end of the first quarter 24-17.

Portugal upped their defensive pressure in the second but to their credit Abby Flynn and Katie Williamson battled hard to keep Ireland in touch. With most of Irelands scores coming from the free throw line in the quarter it was evident that they were beginning struggling with the aggressive defence of the host nation. The score at half time was 44-28.

It was the third quarter that coach Tommy O Mahony will be most disappointed with. Ireland appeared to tire and Portugal, who again capitalised on any Ireland mistake, pushed further ahead. Lauren Darcy and Ciara Byrne gave their all in trying to weather the storm but further threes from Portugal allowed them to consolidate their advantage. The score going in to the final quarter was 68-34. The final quarter saw much better basketball from Ireland with Mia Furlong showing great composure to narrow the gap. A big three from Niamh Kenny, who also showed fantastic defensive presence throughout the game, closed the gap further. Katie Williamson got some excellent scores but in truth the hosts were the better side. The final score read 83-54 in favour of Portugal.

Ireland now moves south of Porto for two days in Averio where they play local professional team AD Vagos in two friendly games. They will look to build on the positive play over the last few days and try to cut down on mistakes as the preparation for the European championships continues.

Ireland Under 18 women put up a strong performance against Israel in their second game of the tournament, but lost out in the end 88-68. Ireland were again without the services of Niamh Kenny (Leaving Cert), Siofra O’Shea and Debbie Ogayemi (inj.) also missed out due to injury. Coming off a defeat to Portugal the previous night Ireland were looking for a much better performance and the team came flying out of the blocks with Katie Williamson and Abby Flynn opening the scoring. Ireland were looking much sharper than the previous night and raced out to an 11-2 lead with further scores from Ciara Byrne and Katie Walshe. Israel, who are competing in the A Europeans this year, quickly settled and scored two quick threes to leave the score at the end of quarter one 16-15 in favour of Ireland.

In the second quarter the game followed a similar pattern with Ireland doing a great job of attacking the basket and Israel capitalising on the smallest of Irelands mistakes. Alex Mulligan had an outstanding quarter scoring 9 of Irelands 15 points. Israel upped their tempo and hit two quick threes just before the break leaving Ireland trailing at half time 35-31.

In the third quarter Israel came out firing hitting four threes in the quarter. Captain Katie Walshe stepped up with three baskets in response but it was Israel’s outside threat that allowed them to push ahead. Lauren Darcy delivered two fantastic back door assists for Ciara Byrne and Erin Maguire to keep Ireland in touch but the Israelis had pushed ahead 63-48 at the end of the third. In the final quarter Ireland played their best attacking basketball with some excellent decision making and some great reads offensively. Ciara Tolan delivered her best performance to date in an Irish jersey and Mia Furlong exerted great pressure on defence allowing the team to get some easy fast break opportunities, again with Erin Maguire delivering some spectacular finishes. Israel to their credit hit six threes in the quarter as Ireland ultimately failed to close the gap leaving the final score 88-68 in favour of Israel t. In all a much more spirited performance from the team than the previous night and offensively they really upped their performance. The Israel team hit 14 threes in the game which allowed them to push ahead to victory. Ireland have a rest day today but will look to keep improving in another game against Portugal on Sunday morning at 11am.

The Ireland U18 women lost their opening bout with hosts Portugal on a scoreline of 77-46 on Thursday evening. In truth, the scoreline does not reflect the battling second half performance from the girls in green, but lessons will have to be taken from the game as they look forward to a clash with Israel this evening (Friday) at 8.15pm. Ireland were without the services of Niamh Kenny (Leaving Cert) and Siofra O Shea (injury).

The game started at a fierce pace with Portugal asserting themselves on the game as they raced into a 9-2 advantage. Ireland were finding it difficult to settle and the hosts moved the ball really well on offence and were able to knock down their open looks. The score at the end of quarter one was 25-8. The second quarter was a little more promising for Ireland as they were able to impose themselves on the game and fight their way back in to contention. The hosts again shot the ball extremely well and went in at half time with a 42-19 advantage.

Some settling words at half time seemed to do the trick and Ireland came out all guns blazing in the third quarter. Ireland narrowed the gap to 14 points at one stage with some excellent defensive effort leading to easy baskets in transition. The score going on to the final quarter was 58-35. In the last quarter Portugal were able to impose their offensive fluidity and found the open shooter which made Ireland pay for the slightest lapse in concentration. The final minutes were played out after two injuries to captain Katie Walshe and Debbie Ogayemi, with Portugal taking the win 77-46 in the end.