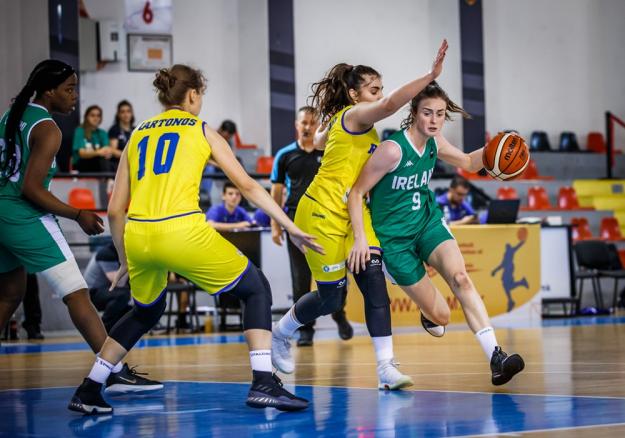 There was disappointment for the Ireland Under 18 women’s team this afternoon as they lost out by nine points to Romania (62-53) in their final Group C game at the FIBA U18 Women’s European Championship Division B in Skopje, North Macedonia.
A superb first quarter from the Romanians was really the difference in the game, as Ireland matched them almost score for score throughout the next three quarters - but their 10-point cushion at the end of the first period was one that Ireland struggled to reduce for the remainder of the game.

That opening period saw Romania take the lead after just two minutes, and they didn’t look back from there, knocking down five three-pointers in the quarter to keep them on top, courtesy of sharp shooters Mara Martonos and Ilinca Sofia Paun. Indeed, it was a shooting exhibition for the quarter, and they opened up a 15-6 lead midway through, following scores from Katie Walshe, Katie Williamson and Alex Mulligan. A follow-up bucket from Abby Flynn stemmed the tide somewhat, but Romania had added another eight points before Ireland responded again through Debbie Ogayemi and led 23-13 at the first buzzer.

An extremely evenly-matched second quarter followed, with Abby Flynn and Ciara Tolan getting Ireland’s scoring underway to close the gap back to five points. Free throws for Romania were responded to almost immediately by Walshe, and a super steal by Flynn set her up for a great score to see Ireland trail 25-21 with four minutes to play in the half. A timely time out from the Romanians though saw them bounce back well, hitting seven points unanswered after the break, before Flynn once more was on hand to chip in with another well-taken score. Romanian still led by 10 points at the half though, 33-23.

Ireland kept their composure in the third quarter, with the hugely impressive Ogayemi getting the first points of the half on the board. Romania responded again at the other end, before Flynn delivered a superb drive and got the bonus point as she was fouled on the way to the basket. It was neck-in-neck as the clock ticked on, with Mulligan again causing huge trouble for the defense inside, and a superb steal by Ogayemi set Flynn up for a great score. Romania were matching Ireland at every turn though, and with the 10-point cushion still in place, they began to push on as the quarter closed, adding a quick seven points in another late run and, despite a Flynn score in the closing minute, Romania led 52-36 going into the last.

A big fourth quarter followed from the Irish, with Mulligan again one of the standouts for the women in green, driving hard at the Romanian defence and was rewarded for her efforts with a score and a bonus point from the free throw line. Walshe added another score seconds later, but again, Romania responded with a killer three-pointer to see Ireland having to work harder once more. Superb rebounding from Ogayemi set Walshe up for her next score, but Romania coolly responded with a three at the other end. With a spot in the final eight at the Europeans up for grabs, Ireland were not going down without a fight, and scores rained in from Ogayemi, Mulligan and Flynn, with fantastic defence from Ciara Tolan and good play from Erin Maguire helping to drive the surge. It wasn’t to be for the Irish though as time ran out on their comeback, and they lost out 62-53 in the end.

“Really disappointing - I didn’t think we came out to play, too many people didn’t show up at the right times," reflected head coach, Tommy O'Mahony afterwards. "We worked and battled really hard, but we gave up too many threes, too many shots. At this level you can’t afford to mix up match-ups or leave shooters open… we worked so hard to get back into the game, and defensive lapses in concentration really hurt us.”

The team now has a rest day tomorrow [Thursday] before they face into the 9-16th place classification rounds on Friday.