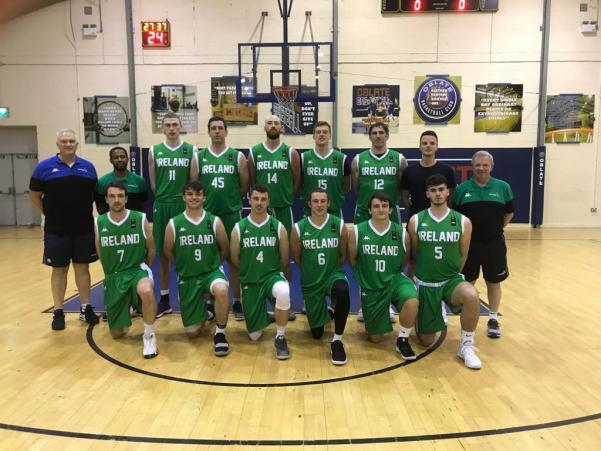 The Ireland Senior Men’s team competed in Slovakia this weekend in a two-game international friendly series against the hosts.

Ireland were well prepared for Slovakia’s aggressive defence this time round, and they started the game very strongly leading 10-4 early on. Ireland forced Slovakia to call a time out when they drove into a 13-8 lead moments later thanks to scores from Adrian O’Sullivan and Ryan Leonard. Slovakia came out strong though and took the advantage at the end of the first, 24-19.

A big second quarter from the Irish saw them outscore the hosts 22-20, thanks to strong offensive displays from Lorcan Murphy, Eoin Quigley and O’Sullivan. Slovakia kept the pressure on, but only managed to hold a three point cushion at the half, 44-41.

An extremely tough third quarter for the Irish followed as Slovakia came out strong, knocking down some big scores early on even under intense pressure from the Irish defence. Andre Jones knocked down three three-pointers in a row, frustrating the strong Irish challenge. Ireland steadied the ship on defence but struggled to score on offence, and the gap on the scoreboard had widened to 77-48 in favour of the hosts at the end of the period.

Ireland were determined to make amends in the last, and achieved their goal of keeping Slovakia under 20 points in the final quarter. Ireland found their scoring touch again and matched the hosts almost score for score. The damage had already been done though thanks to Slovakia’s outstanding three-point shooting in the third quarter, and they ran out 97-65 point winners in the end. Despite the result, Ireland left the game focused and motivated and aim to bring the high intensity of this second game into their games in two weeks time against Luxembourg at home.

It was a tough opening game for the Ireland Senior Men against Slovakia on Friday evening, as they lost out 105-66 to the hosts.

Slovakia’s first game under new head coach Zan Tabak was always going to be a tough test. Zan won an NBA Championship with the Houston Rockets and had also played on that same team with former Killester NBA star Mario Ellie - and has an outstanding coaching record to match.

Slovakia got off to a great start with seven unanswered points, but Lorcan Murphy had other ideas by scoring Ireland’s first five points in quick succession. Slovakia’s aggressive full court defence was causing problems for Ireland, forcing several turnovers. Ireland adjusted and, after five minutes, the score was 13-10 to Slovakia. Both teams traded basket for basket in the last five minutes of the quarter, with Adrian O’Sullivan (5), Ciaran Roe (4) and Ryan Leonard (3) keeping Ireland in the game. The hosts led 24-18 going into the second.

Slovakia started the second quarter at a very fast pace, extending their lead to 34-23. Slovakia’s captain Richard Korner (8) and Andre Jones (8) were causing problems for the Irish defence. Ireland finished the quarter strong, with Lorcan Murphy scoring nine points, while Eoin Quigley and Matt Tracey scored their first senior international points for Ireland. Slovakia led 51-36 at the half.

In the third quarter, Vladimir Brodziansky and Andre Jones combined to score 22 points between them for Slovakia. Ireland really struggled to get their offensive game going, scoring only 12 points in the period, to trail 79-48 going into the last.

Ireland weren’t going to lie down though, and greatly improved in the fourth quarter, scoring 18 points through Adrian O’Sullivan (7), Eoin Quigley (4), Ryan Leonard (3), Keelan Cairns (3) and Ciaran Roe (1). Slovakia’s top scorer in the quarter was 7’3 threat Michael Fusek and Korner and they ran out winners 105-66.