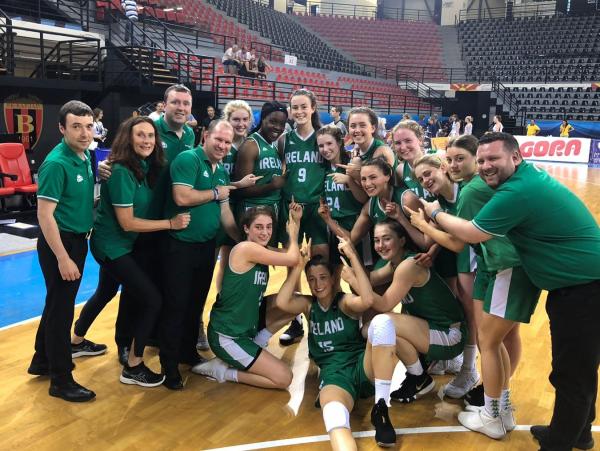 The Ireland Under 18 women’s team rounded off their 2019 FIBA U18 Women’s European Championship Division B campaign in style in Skopje this afternoon, running out 61-48 point winners over Slovakia to secure a ninth place finish in the tournament.

The teams, who had met each other in the group stages of the tournament, were certainly no strangers to each other and with Ireland having taken the win by 12 points in the first battle, Slovakia were looking for revenge. It wasn’t to come for them today though as they were outscored and outrebounded by a superb team performance from the Irish, with Katie Walshe, Debbie Ogayemi and Abby Flynn some of the brightest sparks in an all round fantastic team performance.

A strong first quarter from the Irish set the tone of what was to come, with Ogayemi driving to the basket for the opening score and despite a huge three pointer from Zurana Zahornacka at the other end to see Slovakia edge the lead, it would be a short-lived lead for them, as Flynn, Ogayemi and Williamson drove in some big scores. Great work by Ciara Byrne and Niamh Kenny helped break down the tough Slovak press to set Flynn free, and she delivered an inch perfect pass to Walshe to set her up for her first of 20 points in the game. Another big drive from Walshe, followed by a Kenny put back saw Ireland into a 17-10 lead at the end of the first.

Ireland truly clicked into gear in the second quarter, and put on an exhibition at both ends of the court, with Siofra O’Shea a stand out on defense, as Ogayemi and Flynn (twice) widened Ireland’s lead to 23-10 in the opening minute and a half. A quick time out from Slovakia saw them come back and knock down another three pointer, but big rebounding from Walshe saw her finish off a nice three-point play from the free throw line. Ogayemi was truly the stand out star of this quarter for the Irish, cleaning up on the boards and working hard offensively and she added another four points to round out a 9-0 run for the girls in green. Slovakia just couldn’t find a gap through the staunch Irish defense, and had to settle for free throws to keep their scoring ticking over, as Ireland worked a seamless pick and roll at the other end. O’Shea, Ciara Tolan, Lauren Darcy, Erin Maguire and Mia Furlong were all to the fore at various stages as the quarter ticked down, with Tolan adding free throws and Furlong finishing a good move to see Ireland into a 36-22 point half time lead.

It was raining threes for Slovakia in the third as they knocked down five three pointers in the period, but Ireland were not to be deterred. After Slovakia opened the scoring with two dagger threes, Flynn was on hand with a superb steal and drive, and followed this up with another strong lay-up to keep momentum with the Irish. Another three from Slovakia was responded to immediately with a Walshe bucket, and good work from O’Shea once more paid off, with Walshe again adding another big score to see Ireland with a ten-point cushion, 47-37 going into the last. Flynn, Williamson and Walshe all added early scores in the fourth to widen the gap further, and they, along with Tolan, kept the points raining in. Slovakia worked hard to penetrate the Irish defense, but big boards from Furlong and Tolan kept the pressure off and Ireland drove home to a commanding 61-48 point win after a superb team display.

Speaking afterwards, head coach Tommy O’Mahony stated: “I’m delighted - I thought we really got off to a great start. Even though this was our eighth game, I thought we were full of energy and just really got into it. They came back in the third quarter – as they did in the last game – and hit some threes that really hurt us, but we got it together on the time out and we shut them down and they didn’t have much else after that. We are 6 and 2 for the tournament which not many can say and I’m really delighted with the performance overall.”

REACTION: Head coach Tommy O’Mahony on the Ireland U18 women’s won this evening (check out the thread below to see why he looks so freshly showered )#FIBAU18Europe #GreenShoots #COYGIG pic.twitter.com/PWHnitDLoG