RECAP: Hungary have too much bite for Under 20 men 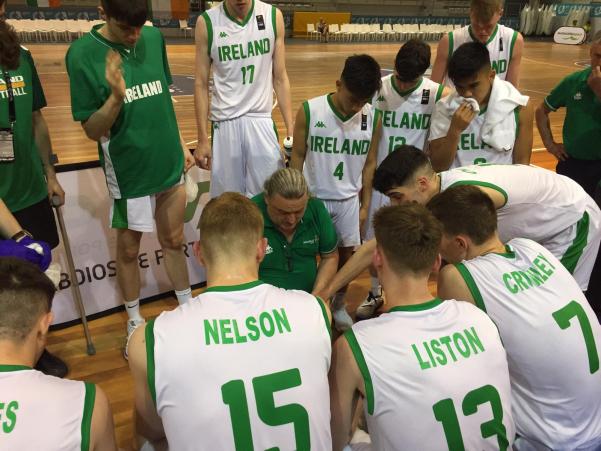 It was a tough day at the office for the Ireland Under 20 men’s team meanwhile, as they lost out to Hungary 49-62 in their third group game at the FIBA U20 Men’s European Championship Division B in Portugal.

The boys in green came into the game off the back of two tough opening round matches against Russia and Iceland and also without the services of the injured James Lyons and Cillian O'Driscoll, but were certainly primed for action, opening up a 6-1 lead early on with scores from Eoin Nelson, Tadhg Crowley and a fantastic spin drive from Conor Liston. Hungary began to show off their strong three-point shooting, knocking down three big ones in the quarter, and despite good scores from O’Sullivan, Crowley, Liston, Eoin McCann and the on-form Eoin Nelson, Ireland trailed 16-19 at the end of the first.
Ireland were in good form though, and with high defensive intensity and a strong work rate on offense, it was only a matter of minutes into the second quarter before they had retaken the lead. Finn Hughes opened the scoring with a bang, while Liston continued to cause trouble for the Hungarian defense adding a great score. With Hungary in foul trouble, Ireland capitalized from the free throw line and with O’Sullivan beginning to hit his stride and a strong drive from Kris Arcilla, they edged into a six-point lead. Hungary came back fighting hard though, with some big scores in the paint and a dagger three to see them into the lead as the clock wound down, but a fantastic finish from Liston though edged Ireland in front by the minimum, 32-31, at the half.
The third quarter was where things started to come undone for the Irish though, as despite a good start from O’Sullivan seeing him drive in a big score with just under a minute gone, that was to be Ireland’s only score for a further seven minutes. Hungary meanwhile went on a 13-0 run that included three big three-pointers to open up an 11-point lead. Free throws from Nelson, and a follow-up score from the big man revived the Irish once more, while a huge three from O’Sullivan down the stretch made it game on once more for the last quarter, with Ireland trailing by just five, 41-46.

Hungary continued to devastate from outside the arc in the fourth quarter, opening the scoring with a big three, before adding two free throws to push their lead back out to ten. A Crowley score was responded to at the other end with a quick lay-up and another three from the sharpshooting Hungarians. Nelson was on hand to tip in a score for Ireland at the other end, and a nice put-back from O’Sullivan followed at the midway mark. Scores were at a premium for both teams as the clock ticked down, with two Nelson free throws the only addition to the Irish tally as Hungary lived up to their name and finished with three more scores to win 49-62.
The Ireland U20 men have a rest day tomorrow [Monday] before facing Belarus in their final group game on Tuesday.