RECAP: Ireland U18 men win out series against Norway 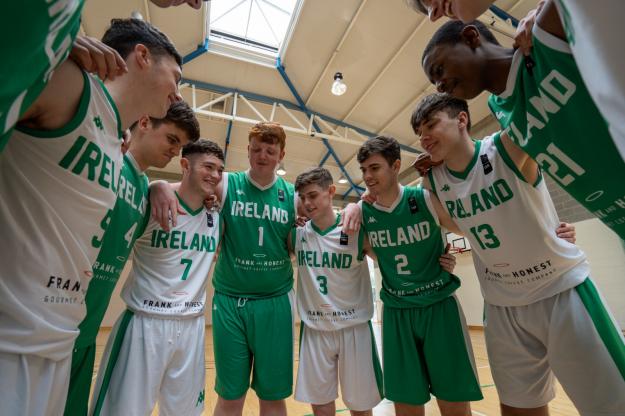 The Ireland Under 18 men hosted Norway in Dublin at the weekend for a three-game international friendly series, and finished strong on Sunday to win the series by two games to one.

The series was the last preparation event for the squad before they fly to Romania next Wednesday ahead of their FIBA U18 Men’s European Championship Division B campaign.

The Ireland Under 18 men’s team is proudly supported by Frank and Honest. You can learn more about them here.

Ireland produced some great basketball on Sunday morning to close out the Frank and Honest Series with a 76-58 point win over Norway.

The early morning start didn’t stop either team coming out of the blocks hard, and Rapolas Buivydas was on form, hitting seven of Ireland’s opening 12 points. Strong shooting from Norway saw them edge the lead at the end of the first, 12-13. The second quarter saw captain Paul Kelly lead by example at both ends of the floor and with Sanmi Fajana proving hard to stop under the boards, Ireland outscored Norway to take a half time lead of 39-22.

An evenly matched third quarter followed, with big three’s raining in from Buivydas, Matt Harper and Nate Moore, while Fajana was punishing under the boards. A good score from Andrew O’Connor rounded out the third, with the Irish leading 60-45.

The last quarter belonged to Ireland as they shifted into another gear and outscored Norway 26-13. Buivydas continued to cause trouble for the Norwegian defense, while threes from Leeroy Odiahi and Moore closed out the game strong for Ireland to see them win 76-58 and take the series 2-1.

Ireland U18 men lost out 68-79 to Norway in Game 2 of their three-game Frank and Honest international friendly on Saturday afternoon.
Norway were definitely hurting from the previous night’s heavy loss and were on the hunt for revenge from the off, making the game an extremely close and competitive affair. CJ Fulton was on hand to punish from outside the arc for Ireland while the inside presence of Sanmi Fajana coupled with shots on target from James Connaire and Tiernan Howe saw proceedings all square at 22-22 apiece at the end of the first.

A much stronger second quarter from the hosts saw them outscore Norway by six in the period. Two massive threes from Fulton, followed by a Howe three kept Ireland’s noses in front and Fajana finished off the quarter with a massive three to see Ireland lead 37-31 at the half. Norway came out of the blocks strong in the third. Big man Paulsen was punishing Ireland under the boards during this quarter and Ireland’s defense was but under serious pressure, allowing the visitors to edge four in front going into the last, 54-58. Momentum stayed with Norway in the fourth, with sharpshooter Kessler hitting some big shots from the three-point line to extend Norway’s lead to 11. Scores from Paul Kelly and Fajana weren’t enough to cut back into the margin, and the Norwegians ran out winners 69-78.

The final game of the weekend tips off at the Arena at 10am on Sunday.

Ireland’s recent run of strong form continued at the National Basketball Arena in Tallaght this evening as they ran out 96-57 point winners over Norway in the first of the three-game series.
Ireland started really strong and imposed themselves with their defence and gave Norway very little room to execute their offence. CJ Fulton and Paul Kelly controlled the tempo while David Lehane and Sanmi Fajana found the openings to keep Ireland in the driving seat. Ireland’s rotations kept the tempo alive and they led 24-12 at the end of the first quarter.
The second quarter saw Norway fight their way back into the game producing an early 6-0 run to force an Irish time-out. Ireland - through scores from Rapolas Buivydas and Tiernan Howe - edged back though, and stretched out the lead to a 44-29 half time cushion.

Ireland bulldozed their way out of the blocks as the third got underway. Their intensity increased and picked off Norway’s errors to race into a 53-31 lead to force a Norway time-out. By the end of the quarter, Ronan Cregan, Leeroy Odahi and Nate Moore had pushed Ireland into a 71-42 lead.
Ireland moved up a gear in the final quarter and they didn’t let up. The continuous rotations allowed Ireland to keep their energy and defensive pressure high, and saw all 12 players get on the scoring to win out 96-57.