RECAP: Ireland U20 men lose to Romania down the stretch 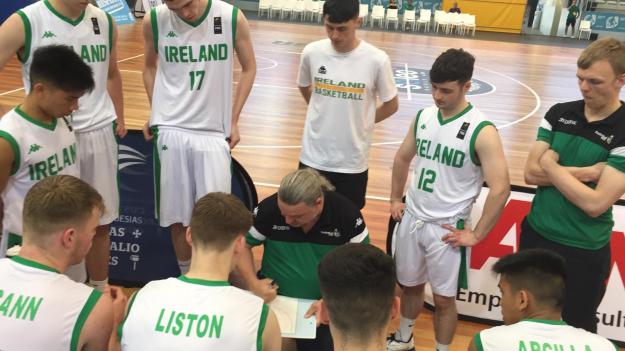 The Ireland Under 20 men lost to Romania, 57-65, in their first classification game in the FIBA U20 Men’s European Championship Division B in Portugal, despite a phenomenal 23 points for Darragh O'Sullivan. This loss will see them play on Sunday for 19th or 20th place.

An entertaining and free scoring opening quarter saw both teams settle into their offensive rhythm early. Eoin Nelson got the first score of the game followed quickly by Darragh O’Sullivan who knocked down the open three, Romania answered right back hitting three 3’s in quick succession to give them their first lead of the game. That was to be the story of this quarter with neither team getting more than a couple of points ahead before being pegged back.  Conor Liston and Cillian O’Driscoll got on the scoresheet, but it was Nelson and O’Sullivan who had fifteen points between them that carried the scoring load. It was Ireland 20 – 21 at the end of the first.

The second quarter was the complete opposite for Ireland, they couldn’t find a way to put the ball in the basket despite some great looks and Romania opened up a twelve-point lead at the half. James Gormley got Ireland’s first score of the quarter with a nice dunk at the five-minute mark with Kris Arcilla knocking down a free throw before Nelson had four quick points to end the half 27 – 39 in Romania’s favour.

Ireland knew that the game could get away from them quickly and that they needed to start the third with focus and intensity, and that’s what they did, O’Sullivan and Gormley opened Ireland’s account to eat into that lead. It was Gormley and Nelson that also had some big blocks at the other end to stifle Romania before O’Driscoll had a nice dunk and the deficit was ten with just under four minutes to go. Up stepped O’Sullivan who had ten of his game high twenty-three points in a two-minute spell, highlighted by a couple of dunks and a four-point play, he tied the game with just over a minute to go. Tadgh Crowley made two free throws to answer Romania’s basket in the dying seconds of the quarter to leave the score line 46-47 going into the fourth quarter.

With the it all to play for, O’Sullivan hit a floating hook shot to give Ireland the lead before Romania took it back. Turnovers started to creep back in for Ireland before Finn Hughes and O’Sullivan had a pair of nice layups to tie the game with five minutes to go. Liston, Crowley and another free throw from Arcilla were all the scores that Ireland would get in that last few minutes as Romania’s ability to make some big stops and hit shots at crucial times told. Ireland worked hard but couldn’t get the ball to drop and it finished Ireland 57 – 65 Romania.

Ireland U20 Men Results and Scorers