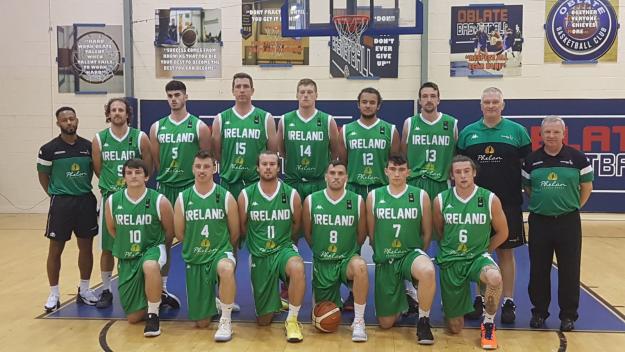 Ireland Senior Men’s team drove home to victory in a pulsating opening game against Luxembourg at Oblate Hall this afternoon, coming back from behind to win 105-101 in a thriller.

Gifting Luxembourg too much court and too much time on the ball on the first quarter, Head Coach Mark Keenan remarked after the game that a slight change in tactics for the remainder of the game allowed Ireland to limit Luxembourg’s easy baskets.

Trailing 27-33 by the end of the first quarter, Matt Tracey and Lorcan Murphy’s direct approach kept Luxembourg from gaining an unsurmountable lead. Luxembourg top scorer Philippe Gutenkauf proved difficult to handle, but once Ireland changed their angle of approach and tightened their defence, momentum flowed in the host’s favour by the midway mark of the second quarter. Marginally leading 62–61 at half-time, Ireland found a style of play that offset Luxembourg’s speed and three-point shooting, with Eoin Quigley and Kieran O’Brien solid defence, while top scorer Matt Treacy found his rhythm early and proved to be a thorn in the side of the Luxembourg defense.

Nothing separated the sides in the third, with Ireland just edging it on the scoreboard, 87-85, but had stretched this lead out to seven by the midway mark in the fourth. Luxembourg responded though through Oliver Vujakovic and Thomas Grun, reducing the deficit once more and taking the lead at one stage. Amid a brilliant team performance, Adrian O’Sullivan and Ciaran Roe were two of the key players down the stretch to help give Ireland the advantage with crucial scores in the face of a tough press from the visitors, and a huge Quigley block at the death helped to sustain their lead. With only seven seconds on the clock, Roe held his nerve from the free-throw line to extend Ireland’s margin to four and see them home to a memorable home victory.

Speaking after the game, Head Coach Mark Keenan delighted in his side’s victory, but emphasised that a win tomorrow is imperative.

“We knew we had to tighten up on our defence and that’s what we emphasised at half-time. We had to make things a lot tougher for them because some of their play in the first-half was a little too easy for them.”

“It wasn’t really a game for the big, physical players today because Luxembourg are so versatile. We played a little bit small because of their quickness. In different games you have to adapt to different situations.”

Ireland take on Luxembourg tomorrow [Sunday] in the second of the two-game series at Oblate Hall, Inchicore.