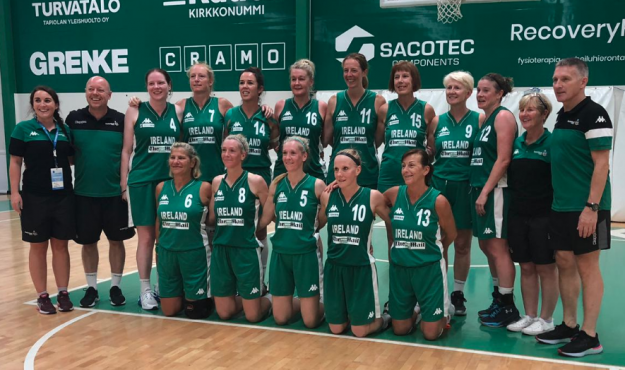 The Ireland women’s masters team lost out to Mexico this evening, 57-44, in their opening F40+ group game at the 2019 FIMBA World Championships in Finland.

The game was nip and tuck for three quarters, with nothing separating the sides, and it was a late spurt from Mexico in the fourth that eventually gave them the breathing room on the scoreboard to push on to win.

A very intense and physical first quarter saw Mexico taking the lead by five midway through. Ireland responded with some nice play from Marla Candon off the bench and she hit three big shots to give Ireland the lead at the end of the first quarter 15-11.

The second quarter was just as physical, with scores at a premium as each team upped the pressure on the defensive end and with the sides matching each other almost score for score, some nice baskets from Mexico saw them draw the game level at 30 points apiece at the half time break.

The game remained neck-in-neck throughout the third. Mexico began to assert their physical presence inside, but Ireland held on and battled through it keeping the score level at 45-45 going into the last.

This game looked like it was going to go down to the wire, however Mexico had other plans and they picked up their defense and got some nice scores from open play to stretch out into a seven-point lead with five minutes to play. Ireland reacted with free throws from the twin sister duo of Grainne and Dee Thomlinson and a pair of free throws from Eileen Bradley but it wasn’t enough as Mexico held on for the win.