RECAP: Physical Belgium too strong for Ireland U18 men 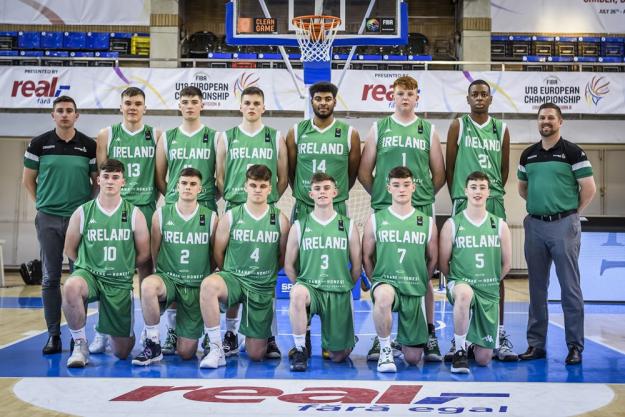 A quick and pacy Belgium proved to be too strong and physical for the Ireland Under 18 men’s team this afternoon in the opening round of the 9-16th place classification games at the FIBA U18 Men’s European Championship Division B in Romania, as they ran out 93-70 point winners over the boys in green.

Ireland just could not contain the sheer size and athleticism of the Belgians, with foul trouble haunting the Irish throughout as they sent Belgium to the free throw line 31 times during the game (in comparison to just 14 free throws for Ireland), while two of the Irish team - James Connaire and Sanmi Fajana – were fouled out in the second half. Belgium were deep all round, with their bench hitting 55 of their finishing total of 93 points, and all 12 players getting on the score sheet. Ireland were dealt a further blow when CJ Fulton left the court early in the third quarter due to injury.

Aside from the extra advantage from the free throw line, overall the Irish kept up extremely well with the Belgians, bagging 12 offensive boards to Belgium’s 10 and getting 42 points in the paint to Belgium’s 44. Belgium edged it on the fast break, knocking down 17 points, while scooping another 22 points from turnovers. Paul Kelly was again one of the stand outs for the boys in green hitting 11 points along with seven rebounds, while Rapolas Buivydas was also in super form, top scoring for the team with 16 points, scooping eight rebounds, two steals and two blocks as he hurt the Belgium defense in the paint time and time again. Leeroy Odiahi also put in an impressive performance off the bench, while Ireland worked extremely hard across the team on defense.

Belgium got off to the stronger start early on, with Ajay Mitchell knocking down two big three-pointers and Tom Mark getting inside for two big scores to take a 13-6 lead by the midway mark. Ireland found their feet though, and scores from Fulton, Kelly and two great baskets from Odiahi closed the gap back. A big score from Buivydas as the clock ticked down saw Belgium lead by just four at the end of the period, 21-17.

Mitchell drained another three for the cats as the second got underway, while Aaron Verstraete began to cause trouble for the Irish defense, hitting a long three and adding a further four points. Scores from Kelly, Buivydas, Connaire and a fantastic spin drive from Connaire again followed for Ireland but, despite good defense from Ronan Cregan, Tiernan Howe and Daire Kennelly, Belgium had a 41-29 point cushion at the half.

A huge third quarter from the boys in green followed as they went on to outscore Belgium 20-22 in the period. Scores from Kelly, Buivydas and Fajana began to close the gap. Fulton hit a monster three early on, but unfortunately, picked up an ankle injury in the process and had to head for the bench. Nate Moore was on hand to slot home the resulting free throw, and a huge three from David Lehane followed to swing momentum firmly in Ireland’s favour, closing the gap back to 46-40. Fajana hit his stride at the midway mark, adding a three and two big drives to his tally, but Belgium regrouped down the stretch and closed out the quarter well to lead by 10 points, 61-51. Belgium pushed on from there in the fourth quarter, despite great work from Moore, Kelly, Buiyvdas and Odiahi. Mitchell and Verstraete continued to cause trouble inside and a tiring Ireland got into team foul trouble with just two minutes gone in the quarter. With both Connaire and Fajana out of the game, the Irish dug deep with Buivydas and Kelly leading the charge, while a huge three from Tiernan Howe had the crowd cheering. Good work by Matt Harper and Kennelly just couldn’t stop the pacey, physical Belgians though as they drained three quick threes in succession to pick up the intensity another gear and run out 93-70 point winners in the end.

Speaking afterwards, head coach Paul Kelleher stated: “I thought our boys gave absolutely everything. They battled so hard. That intensity that Belgium brings is off the Richter scale, I’ve been 14 years doing this and I’ve never witnessed anything like it before. They’re very, very physical, they’re very quick and they’re better shooters than what we gave them credit for. They made great reads and their length and their power was great but I think our boys were tremendous we put 70 points up against them. We gave a great account of ourselves in that performance, I thought our boys executed well, they just had that extra gear every single time. We were right there with them with five or six minutes to go – that’s been the story of the tournament really, those last five or six minutes. But the boys were fantastic, they gave everything and when you give everything and the other team is just better you have to accept it and move on.”

Ireland will take on Belarus in the next classification game at 12 midday tomorrow (Sunday).