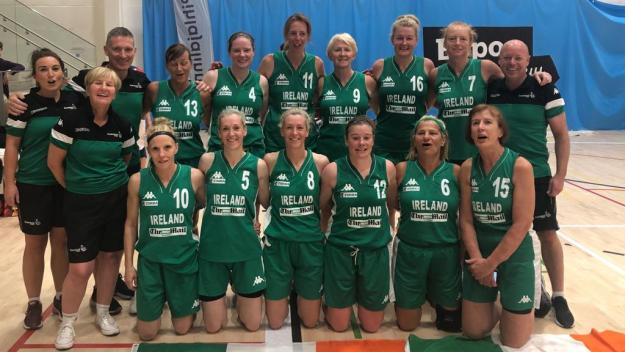 The Ireland Women’s Masters F40+ team secured their second win of the FIMBA World Championships, with a 59-41 point win over Great Britain on Friday afternoon.

Ireland opened up an early 7-0 lead early on, with Eileen Bradley cleaning up on the offensive boards and Marla Candon clinical in execution. GB rallied as the quarter ticked down but Ireland had done enough to hold a 15-7 cushion at the end of the first.

Momentum stayed with the Irish in the second, with a number of players making big impacts off the bench, including Therese Traynor, Suzanne Lakes, Jo O’Keefe and Grainne Tomlinson. Ireland hit a big shooting percentage from the floor while Candon continued her fine form on the offensive end. Defensively, Ireland probably had their best outing and they led 34-15 at the half.

Ireland kept up the relentless pressure in the third quarter, with Deirdre Tomlinson, Pamela Grogan and Anne Marie Troy all combining well. Candon remained unstoppable on offense, while Siobhain Monerawela, Traynor and Regina Birmingham all contributed well. A late rally from a spirited GB side saw them get some vital points on the board but Ireland still had a comfortable cushion, 46-26, going into the last.

A stronger closing quarter from GB saw them get some nice baskets early on. Ireland continued to use its bench well, and Boylan, O’Keefe and Bradley were excellent on the boards at both ends of the floor. Despite the best efforts of GB, they had no one to match up with Candon, while the Tomlinsons caused trouble for the GB defense time and again. Good play down the stretch from Monerawela, Traynor and Birmingham helped stem the tide of the GB offense and see Ireland win out 59-41.

Ireland now battle with Colombia A on Saturday (August 3rd) to determine the 9/10th place position.