Ireland U16 Women in Germany for final euro prep games 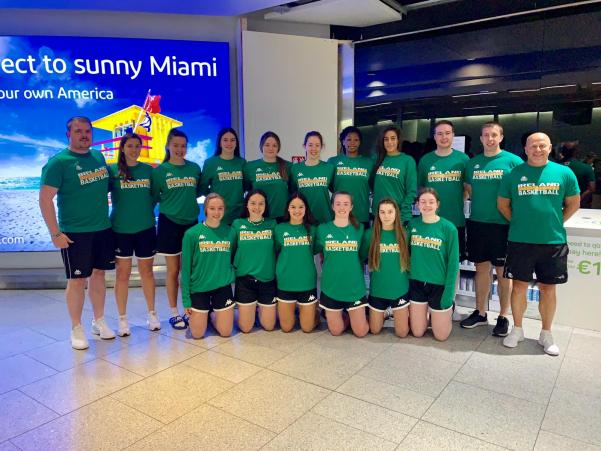 Ireland U16 women are in Germany at the Olympic training center for their final preparation games in advance of the FIBA U16 European Championships.

Head coach Andy Gill "the opportunity to play a European powerhouse in Germany at their Olympic training center was too good an opportunity to miss. We realise that they are a top A division team but we had two encouraging wins in Luxembourg and we will try and impose our playing style in the two games and look for positive outcomes. It will be a test of our skill, organisation, and resilience but you can rest assured, that whatever the result, this team will leave it  all on the line."

The Irish u16 women went into their second game of the series versus Germany looking to improve on the performance from yesterday when they battled hard for 3 quarters before looking worn out in in the fourth quarter and losing 76-46. Coach Gill had put a focus on transition and battling the much larger and stronger Germans under the boards but in the first half the game followed a similar pattern to yesterdays game. Germany looked like the ‘A’ nation, taller, stronger and more athletic than their Irish counterparts they raced out to a 10-2 lead and controlled the first half winning it on a scoreline of 40-23.

Ella O’Donnell was a bright spark for Ireland in the first, a succession of blocked shots and rebounds added to three-point shooting and precise footwork in the post displayed her complete all-around game. Paris McCarthy also impressed in the first half, with one play in particular standing out, stealing the ball off the German star player, Sontag, McCarthy went full court versus the back tracking German rear guard before picking up her dribble and euro stepping around the last defender and finishing with a soft finger roll that brought the Irish bench to their feet. When Tania Salvado made a short jump hook Ireland had closed the lead to 6 points but Germany went on a 15-4 run to close out the half and despite the Irish highlights which included a polished post move by Sarah Hickey just before the shot clock expired and a trademark Kara McCleane floater a potential blow out was on the cards with Germany looking firmly in control at the half.

Despite the ominous looking situation not a single Irish head dropped as they came out in the second half all guns blazing, opening the period with a 7-0 run which let Germany know they were still in a game and what a game it was! Co-captain Hazel Finn scored all 7 of the points but it was the intensity of the Irish defense that was causing Germany real issues. Michelle Ugwah was a force on both ends shutting down anything that came her way on defense and showing a soft touch around the rim on offense. Her Antetokounmpo like ability to switch from guarding a centre in the post to a point guard 20 feet from the basket was a corner stone of the Irish defense as she blew up pick and rolls all over the floor and with Sophie Moore bringing the intensity off the ball, Casey Mulvey chasing down every rebound and loose ball and Sinead Keane getting in on the act with a spectacular blocked shot of her own Ireland were in inspired form on the defensive end.  When Finn hit a three pointer from so far away that she may as well have still been back in Galway the lead was cut to single digits and the German supporters drums which were thunderous in the first half were silenced as they called their second time out of the quarter to try and figure out how to stop the Irish surge as the game progressed into the fourth quarter.

No matter who came into the game the intensity remained high, Kate Kelly had picked up a knock earlier in the game but returned in the fourth showing the mental and physical toughness that exemplified the Irish performance. Miah Ryan had one of the scores of the game as she picked up the ball and went the length of the court before finishing the play with a spinning scooped layup that dropped into the basket to the delight of the Irish bench. Germany were more composed in the fourth and showed their class with star point guard Pietsch expertly running the offense. The teams would go basket for basket the rest of the game, Germany unable to pull away and Ireland unable to cut further into the German lead, a last second three pointer would see Germany narrowly win the second half battle by a single point, 29-28, but it was an inspired performance by the Irish team which showed great improvement from the first game and provided evidence that they can compete in spells with some of the top nations ahead of the European Championships in Sofia next week. Head coach Andy Gill "We didn't make the adjustments needed in the first half but after halftime we were absolutely magnificent, we won the rebounding battle and it was one of the outstanding performances of my 6 years as a international coach."

The Irish u16 women travelled to Heidelberg this week to take on ‘A’ nation Germany in a series of warm up games for the European Championships that begin in Sofia next week. It was always going to be a tough games versus a quality opposition and Germany showed their class jumping out to a 8-0 early lead before co-captain Casey Mulvey ran a Steph Curry style give and get action to free herself up to sink a corner three pointer. Miah Ryan came into the game and got to the free throw line to knock down 2 shots after a strong attack in transition and when Ella O’Donnell put up a couple of scores within a minute Ireland had weathered the early storm and were within 2 points of the hosts. But Germany answered the Irish run by dominating the offensive glass and gaining 8 second chance points in the quarter to go in up 21-12.
The second quarter opened with some sloppy Irish play and after a Kara McCleane turnover coach Gill was forced to call a time out to refocus the squad. McCleane showed her mental toughness matched her talent as she came out of the time out and scored 2 great baskets in a minute, the first a dead on three pointer then a trade mark salmoning drive to the basket, expertly avoiding defenders and finishing through contact. Ireland looked full of confidence and Sarah Hickey stepped back behind the three-point line to drill a deep one and force the Germans into calling a time out as Ireland had closed the gap to 32-22. Hickey then turned provider driving and dishing to O'Donnell who sank a three of her own as the game really started to liven up with both squads trading blows. Michelle Ugwah was a force on defense for Ireland picking up 2 blocked shots and a steal to go with 3 rebounds on her first few minutes on court. The game started to become scrappy and tempers frayed as the intensity was rising and a killer corner three pointer saw Germany edge the second quarter and lead 45-33 at the half.
A change in defense would pay dividends for Ireland at the start of the third quarter as they held Germany scoreless for over five minutes but unfortunately the Irish offense couldn’t convert some easy chances to take advantage and make significant inroads into the German lead. Germany found their rhythm in the second half of the quarter with 2 transition layups and a corner three but Hazel Finn ensured Ireland stayed in touch with two baskets, a driving layup and a put back after snatching the ball back after a German rebound. Sinead Keane was turning defense into offense for Ireland grabbing rebounds and pushing the ball and Kate Kelly was causing Germany trouble with aggressive moves in the half court. Ireland were battling hard but in the fourth quarter they seemed to run out of a little bit of energy as the task of battling the larger Germans in the hot Heidleberg gym was taking its toil. Paris McCarthy was a bright spark for Ireland in the period scoring two baskets and getting herself to the free throw line with a strong drive after a sneaky Sophie Moore steal. Germany finished up winning on a scoreline of 76-46 but the Ireland coaching staff will take a lot of positives from the game going forward into game two. Head coach Andy Gill "It took time to get into the pace of the game and beyond the last quarter, we did a really good job. It was a great learning experience and we will go hard again tomorrow."