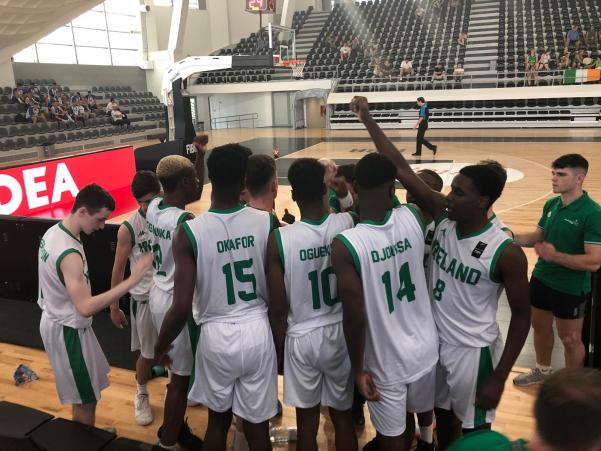 The Ireland U16 men's team overcame Cyprus 82-50 in their penultimate group game of the 2019 FIBA U16 Men’s European Championships Division B.

A fast and furious start to the game saw Ireland jump out to an early lead, Mobi Ikegwuruka got six quick points after Captain Michael O’Mahony hit a three to open Ireland’s account. Cyprus struggled with Ireland’s athleticism who forced seven steals and scored well in transition in the opening quarter. Clinton Efinda, Milo Herbst and Darragh Ferguson all contributed well defensively and got on the scoreboard. It was 22 – 13 in Ireland’s favour going into the second.

ND Okafor was the standout again finishing with 15 points and 15 rebounds and it was in the first half that he did most of the damage. Cyprus had no answer to the defensive intensity and rebounding prowess shown by this Irish team, with Efinda and Ryan Djoussa combining well with Okafor to have 31 of Ireland’s 59 boards. At the half the lead had increased to 16, 43-27.

The third quarter was where Cyprus were put away, holding them to just seven points, Ireland led by the Pollmann-Daamen brothers and Herbst put them under pressure every possession and didn’t give any second attempts.  Wede Esajobor, Nelson Fotso and Roneil Oguekwe had 13 of the 21 points and the game was over as a contest. It was 64 -34 to Ireland at the start of the fourth.

A flurry of three pointers started the fourth ensuring that gap was maintained before Djoussa finished the quarter in style with the final 6 points for Ireland. The game finished, Ireland 82-50 Cyprus.

After the game head coach Pat Price stated “It was a solid all-around performance. We took better care of the basketball and continued to defend well. All twelve players made positive contributions and we had a nice rotation that allowed us to rest players for the Netherlands game tomorrow. “